i had visions of this schematic diagram (along with sugarplums, of course!) knocking around in my head over christmas. for those of you who haven’t been following along, it came to mind ’cause of a brief conversation in this comments thread here.

the slopes might not be exactly right for conveying what i’ve got in mind — if i had actually drawn the graph myself, maybe they’d be more “right” (i brazenly stole and adapted the graph from wikipedia) — but hopefully you’ll get my general meaning. see what you think: 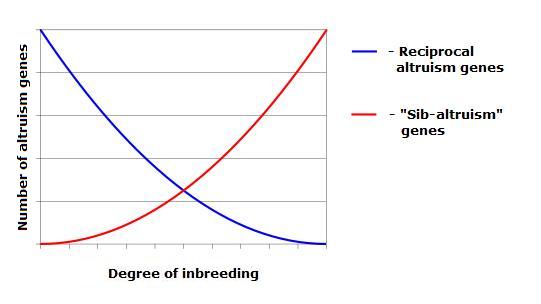 (hint: as the degree of inbreeding in a population increases, the number of reciprocal altruism genes decreases while the number of “sib-altruism” genes increases. and vice versa.)

(note: comments do not require an email. sugarplums!)