ihtg said about trust: “Unlike IQ/g, trust isn’t (IMO) an innate personal attribute encoded within one person’s brain. It’s a variable in a man’s interaction with his peers. Its existence depends on that interaction.”

clearly trusting someone else happens during an interaction, yes. and the level of trust will be higher or lower depending on the circumstances in which that interaction happens — it’s prolly much easier to be trusting nowadays in peaceful, middle class minnesota than in war-torn congo.

but being trusting is also a personality trait — being more or less trusting is something innate — at least partly. and, like all the other personality quirks, it varies from individual to individual — and from population to population. from “Heritability of cooperative behavior in the trust game” in which the researchers studied twins taking part in the trust game [pgs: 3724-25, link opens pdf]:

“Our results thus suggest that humans are endowed with genetic variation that can partially account for differences in trust and trustworthiness when interacting with anonymous partners in the laboratory….

“Although we do find that genetic differences play a significant role for behavior in the classic trust game, the largest portion of the variance is explained by differences in unique environment. This is consistent with general results from the trust game that indicate behavior is more susceptible to state (unique mood, context) than trait. However, a result that may surprise some social scientists is that genetic differences appear to be a more important source of phenotypic variation than differences in common environment. This finding is in line with a broad consensus in the behavior genetics literature. Indeed, the second ‘law of behavior genetics’ proposed by Turkheimer is that the effect of being raised in the same family is generally smaller than the effect of genes.”

swedes appear to be more trusting than americans to me. unfortunately, “american” is such a catch-all description, it’s difficult to know what sort of ethnic groups we’re talking about here (note that the americans had more options of how much to share than the swedes did): 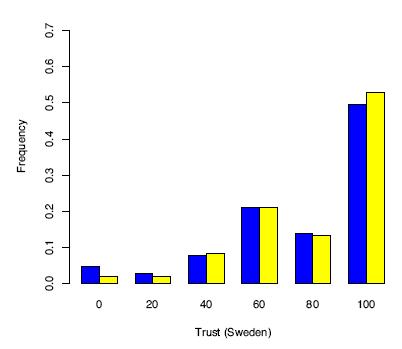 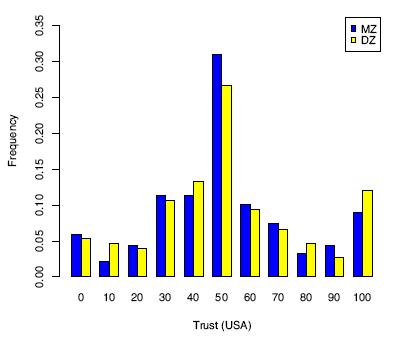 and the heritability of trust amongst swedes seems to lean a bit more towards a genetic explanation than amongst americans. (interesting that the shared environments of the twins seems to have amounted to diddly squat.):

people who are more agreeable — as in agreeableness in the big five personality traits — tend to be more trusting:

“People who score high on this dimension are empathetic, considerate, friendly, generous, and helpful. They also have an optimistic view of human nature. They tend to believe that most people are honest, decent, and trustworthy…. [I]n general, people who are concerned about others also tend to cooperate with them, help them out, and trust them.”

i’m not very agreeable (32nd percentile). i just know i’m gonna wind up a cranky, old cat-lady yelling at the kids to GET OFF MY LAWN! (~_^)

(note: comments do not require an email. get off my lawn!)