over here i suggested that it’s not really correct to just talk about “tribes” since they probably have different characteristics depending upon the mating systems found within them. arab tribes, for instance, seem rather different in nature from indian (the ones in india) tribes. sure, they’re all inbreeding and so they’re rather hostile to outsiders, but arab tribes are more like afghani tribes than they are like indian (the ones in india) tribes.

greying wanderer linked to a site here which explain how mother’s brother’s daughter marriage (mbd marriage, or matrilateral cross-cousin marriage) enables a broad range of alliances between different lineages, or even clans, because each generation marries “out” of its lineage.

i always need a picture painted for me, so here we go. here’s what a couple of generations of fbd marriage looks like: 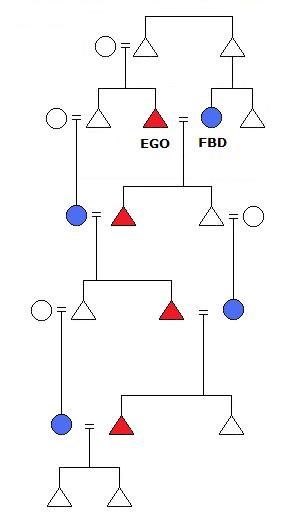 and here’s a couple of generations of mbd marriage: 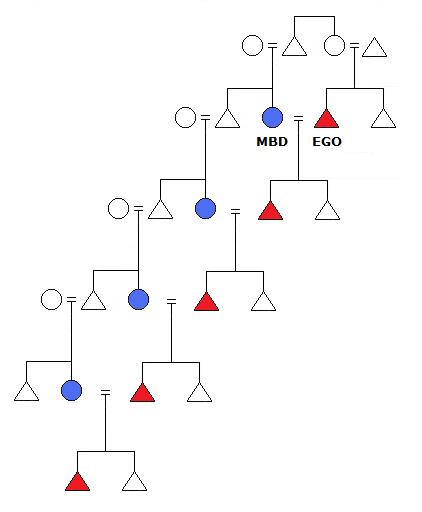 see how in mbd marriage, women are always being brought into a patrilineage from another lineage. in fbd marriage, the whole system sort-of doubles back on iself every other generation. fbd marriage is a pretty closed system, whereas mbd marriage enables alliances with other groups.

mbd marriage was, apparently, the common or preferred form of cousin marriage in china back in the day. if wikipedia is to be believed, cousin marriage has not been so prevelant in china — or, at least, not so encouraged — for the last half century or so. cousin marriage is actually now illegal according to china’s 1981 marriage law. (have tptb in china been reading thomas acquinas?)

i think different tribes are different partly because of the mating patterns found in whatever given societies you’re looking at. that’s my theory and i’m sticking to it! (for now.)

(note: comments do not require an email. an antarctic tribe.)