i keep saying that i’ll define more clearly what i mean by “inbreeding” and “outbreeding,” but i never do. finally! — here i am, and i’m gonna do it! (^_^)

from the oxford dictionary of biology:

– inbreeding: “Mating between closely related individuals, the extreme condition being self-fertilization, which occurs in many plants and some primitive animals.” (see also wikipedia.)

– outbreeding: “Mating between unrelated or distantly related individuals of a species.”

i’m primarily interested in the evolution of altruism and other “innate social aptitudes” in man [pdf] — and here’s where inclusive fitness comes into the picture, btw — and the role that inbreeding and outbreeding might play in all that.

inbreeding in and of itself does not change the frequencies of genes in a population — it just moves them around, concentrating them in certain lineages. however, wade and breden showed in some mathematical wizardry modelling that, under certain circumstances, long-term, sustained inbreeding can, in fact, lead to increased frequencies of “genes for altruism” in a population.

wade and breden looked at four inbreeding scenarios: 1) self-fertilization (doesn’t happen in humans); 2) if the mating individuals shared half (50%) their genomes in common (like parent-offspring matings or sibling matings); 3) if the mating individuals shared 20% of their genes in common (this is somewhere in between first cousins and double-first cousins or uncle-niece/aunt-nephew); and 4) if the mating individuals shared no genes in common (not the typical pattern in human matings). most human populations do not practice parent-offspring/sibling matings — in fact, it’s usually avoided and considered by most as really icky. but quite a lot of peoples regularly marry first cousins, and some (in the arab world/middle east) even often marry double-first cousins — nor is the world short on uncle-niece pairings (southern india, for example — or hasidic jews).

wade and breden found that, under certain circumstances, long-term, sustained matings between individuals that share 20% of their genomes in common can lead in an increase in altruism genes in that population. first cousin marriage, probably the most common form of inbreeding in humans, is a little short of what wade and breden looked at, but it’s not terribly far away either (12.5% relatedness vs. 20% relatedness). you would think that the slope of the line for inbreeding at 12.5% relatedness would fall somewhere in between that for 0% and 20% (solid black line) on wade and breden’s lower graph here: 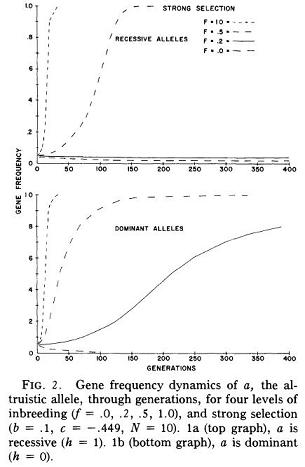 so, on this blog:

– inbreeding = in a population, a general pattern of regular and sustained mating between individuals who are related to one another as second cousins or closer.

– outbreeding = in a population, a general pattern of regular and sustained mating in which individuals avoid second cousins or closer.

notice the “regular and sustained” bit. that’s important. we’re not talking here about occasional marriages between cousins. it has to be a regular practice in a society. i’m not sure what the frequency of the inbreeding needs to be. it will vary according to population size, of course — the smaller the population, the more closely related everyone’s going to be anyway (e.g. the yanomamo). in a larger population? — dunno. definitely when 50% of marriages are consanguineous over the long-term i think the frequencies of “genes for altruism” are going to increase pretty rapidly (i’ll come back to what sorts of altruism in another post). 30%? probably. 3%? not really.

outbreeding, too, needs to be “regular and sustained” to have any effect, i.e. to have a population slide back down wade and breden’s slope in reverse. one generation of outbreeding probably won’t have much of an effect, i think. evolution (natural selection) does take some time, after all. also, if one inbreeding group interbreeds with another inbreeding group, that’s NOT outbreeding according to my definiton. technically it is in biological circles, but if we’re talking about two populations that have been inbreeding for a long time and, therefore, have acquired a lot of genes for my “familial altruism,” then all they’re doing by interbreeding is swapping familial altruism genes. for example, if you’re the early medieval irish and are clannish because you’ve been inbreeding for who-knows-how-long, the “outbreeding” that you do with the vikings when they show up (probably) doesn’t count wrt altruism, because they’re a long-term inbreeding group, too.

to have any effect on the frequency of certain “genes for altruism,” outbreeding — like inbreeding — needs, i think, to be regular and sustained over the long-term, as it was with europeans (mostly northwest europeans) since the early medieval period (see also mating patterns in europe series in left-hand column below ↓ for more details) and, perhaps, some other groups like the semai in malaysia.

previously: inbreeding and the evolution of altruistic behavior