here’s another map of europe — from steven pinker’s Better Angels: 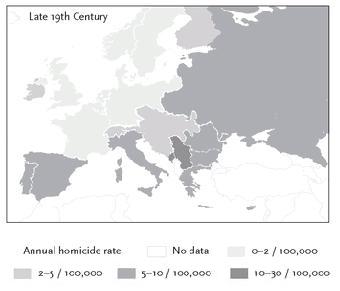 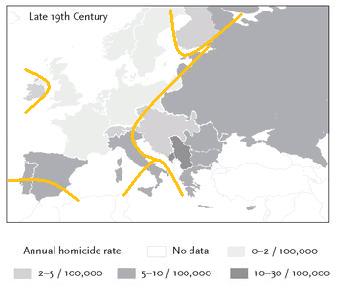 what i’ve been wanting to see is a map showing the reduction of homicide rates in europe over time. eisner has shown that the homicide rates didn’t drop all at once — they started dropping the earliest in england, belgium/netherlands, germany and switzerland — later scandinavia — and, much later, italy and the rest of peripheral europe (see this post for more details and nifty charts). here’s pinker summarizing eisner’s findings (from chapter 3 of Better Angels):

“Were the English unusual among Europeans in gradually refraining from murder? Eisner looked at other Western European countries for which criminologists had compiled homicide data. [T]he results were similar. Scandinavians needed a couple of additional centuries before they thought the better of killing each other, and Italians didn’t get serious about it until the 19th century. But by the 20th century the annual homicide rate of every Western European country had fallen into a narrow band centered on 1 per 100,000….

“The Civilizing Process spread not only downward along the socioeconomic scale but outward across the geographic scale, from a Western European epicenter…. England was the first to pacify itself, followed closely by Germany and the Low Countries. Figure 3-8 [the one i half-posted above – h.chick] plots this outward ripple on maps of Europe in the late 19th and early 21st centuries.

“In the late 1800s, Europe had a peaceable bull’s-eye in the northern industrialized countries (Great Britain, France, Germany, Denmark, and the Low Countries), bordered by slightly stroppier Ireland, Austria-Hungary, and Finland, surrounded in turn by still more violent Spain, Italy, Greece, and the Slavic countries. Today the peaceable center has swelled to encompass all of Western and Central Europe, but a gradient of lawlessness extending to Eastern Europe and the mountainous Balkans is still visible.”

i wanted to see THAT on a map, so i drew one (NOT with crayons, although it kinda looks like it…). lighter shades=earlier drop in homicide rates; darker shades=later drop. i’ve indicated the century in which homicide rates began to drop for each region. and i’ve drawn in the hajnal line: 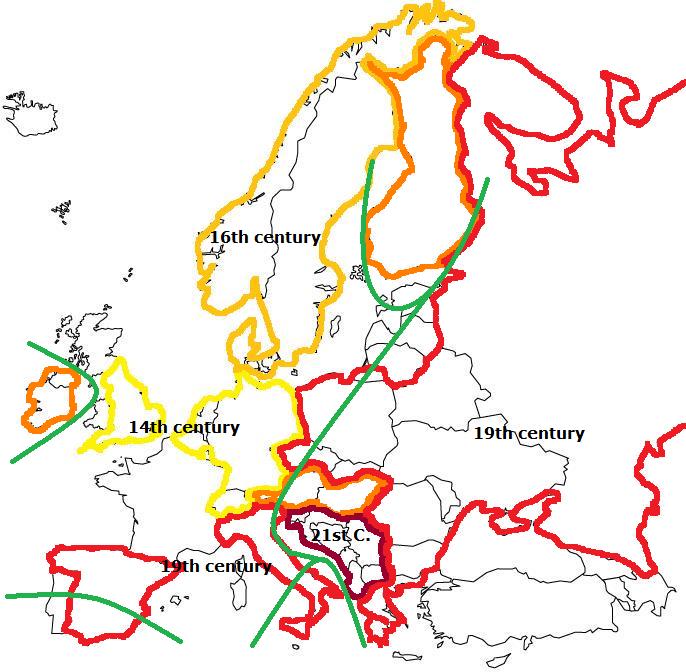 finally, a footnote from pinker:

“There are gradients within each of these countries as well: the hinterlands and mountains remained violent long after the urbanized and densely farmed centers had calmed down. Clan warfare was endemic to the Scottish highlands until the 18th century, and to Sardinia, Sicily, Montenegro, and other parts of the Balkans until the 20th.”

previously: ibd rates for europe and the hajnal line and outbreeding, self-control and lethal violence and what pinker missed

(note: comments do not require an email. hello there!)