warning: you may not want to read these right before a meal if you’re at all squeamish or easily grossed out. (~_^)

yes, you read that right — ingesting menstrual blood. and you guys thought sleeping with your sister was gross! ewwww! well, at least they add sugar:

“A woman’s monthly flow is always viewed as potent. Yet the first flow a woman elicits is considered to be the most potent fluid of all. Tara said she was twelve years old when she got her period. She told her mother, who told her father. And her father went to their family guru, to tell him what had happened. Their guru then invited other sadhus to his ashram for the forthcoming event to ingest the fluid. ‘Great sadhus gathered together to partake in the new fluid,’ said Tara calling the fluid rup. ‘It is a very good thing. If my son had been a girl,’ she added, ‘great sadhus would come to my house, asking me to invite them. For few people manage to obtain it.’

“Tara’s father had prepared himself ahead of time. He purchased a piece of cotton cloth at the market so that she could wear it when her rup appeared. After this, he gave the cloth bearing the rup to the family guru. Upon receiving it, the guru stored the cloth away. The bloodstain dried and the cloth hardened. A month went by while waiting for the other sadhus to appear. When they finally gathered together, her guru rinsed the cloth in water. Then he cooled the fluid down, by soaking it in four different substances. These were cow’s milk, coconut juice, camphor, and palm juice. He also added white sugar, to sweeten the ingredients. Tara said, ‘the mixture of red rup and white milk yielded a syrupy substance, bearing the color pink. Milk,’ she mused, ‘is very strange. It draws the red rup out of the cloth, so that the cloth turns white again.’ She went on to tell me that when the different ingredients had merged, the coconut shell containing the fluid was passed around to those present, so that each one, including herself could have a sip.”

and if that weren’t weird enough, look what some people in china do! (i checked the original story using google translate and it seems legit.):

“Every early spring, a foul odor fills the air of Dongyang, Zhejiang Province. Dongyang people call it ‘the smell of spring.’

“Yuck, it’s actually the smell of urine. And prepare yourself for this: Dongyang people boil eggs in boy’s urine and sell them at 1.50 yuan (23 cents) apiece. It sells like hot cakes.

“The convention of eating such eggs, called tong zi dan (童子蛋) in Chinese, literally Boy Egg, is so deeply entrenched that the city of Dongyong listed it as local intangible cultural heritage in 2008.

“Boy egg vendors go to local elementary schools to collect urine from prepubertal boys, preferrably under the age of 10, with buckets….

“Ms. Li introduced her tip of boiling eggs in boys’ urine: first, soak eggs in urine and heat them over the stove. After it boils, get all eggs out and crack their shells before putting them back. After a while, pour in new urine. Repeat it and simmer eggs for an entire day.” 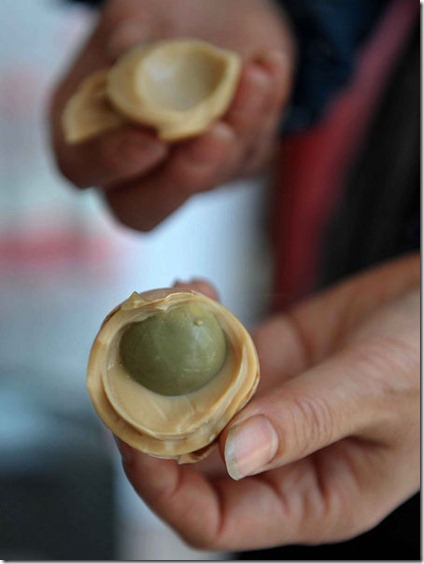 you wonder how many human behaviors like these start out as dares (i dare ya! i double dare ya!) and then become tradition. (~_^)

moral of the story: humans WILL do the weirdest things.

(note: comments do not require an email. gotta luv anthropology!)