so, libya’s got a handful of ethnic groups…

(here’s a nice map outlining from whence they hail.)

plus there’s a whole bunch o’ immigrants (some legal, a LOT illegal) from egypt and tunisia and sub-saharan african countries…

simply having all these various ethnic groups in one country would make things really interesting on the political scene (with all those conflicting ethnic genetic interests); but THEN, libya is full o’ tribes, too! tribes, tribes, and more TRIBES! all of the berbers and arabs and arabized berbers are divided into who knows how many tribes and clans and familial-what-nots (i dunno — i couldn’t find a comprehensive list online).

97% of the population is muslim, and 90-95% of them are sunni muslims. so there’s not really any obvious ethnic/tribal divides along religious lines like there is in bahrain.

nope. what there is is TRIBES.

tribes seem to be a complete mystery to (most) contemporary cultural anthropologists, prolly ’cause most of them don’t do science.

however, mr. snappy dresser himself knows what tribes are (pg. 299). in fact, he sounds like he’s been reading a lot of steve sailer!:

“A tribe is a family which has grown as a result of procreation. It follows that a tribe is a big family….” unfortunately “…tribalism damages nationalism because tribal allegiance weakens national loyalty and flourishes at its expense…. It is damaging to the political structure if it is subjected to the family, tribal, or sectarian social structure and adopts its characteristics.

so, he’s not quite as dumb as he looks, eh? not quite. 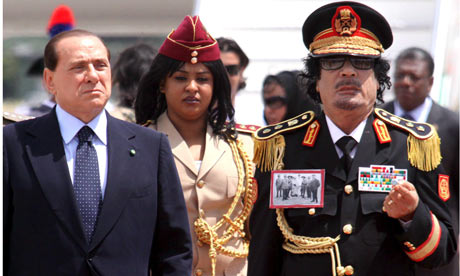 muammar al gaddafi is a member of the — you guessed it — al gaddafi tribe. i’ve seen the gaddafi tribe described as a both a berber tribe and an arabized berber tribe, so i’m not sure how berber and|or arab m. gaddafi himself is. in his early years he was a big follower of nasser and pan-arabism, so i’m guessing he’s quite arab, but you never know. maybe he was just keen on allying himself with powerful folks in the arab world. (apparently, there are one million members of the al gaddafi tribe in egypt. don’t know if that makes the gaddafis arab tribes or arabized berber tribes or what. -??- i wonder how many of the illegal egyptian immigrants in libya are gaddafis?)

anyway. at the beginning of his glorious revolution, gadaffi apparently tried to get rid of the tribes and tribal sentiments in libya. at the very least, he tried to minimize their power (while appointing members of his own tribe to important positions, of course.) this didn’t work out. the tribes didn’t just miraculously go away just ’cause he instituted a new -ism in libya. (what he should’ve done, of course, if he truly wanted to break the tribes, was to force everyone in libya to marry out of their tribe. ah, well. looks like it’s too late now!)

when that tactic didn’t pan out, gaddafi, in the ’80s, began to (try to) work with the tribes:

“Al-Qadhafi said political parties – whether they are Arab nationalists, communists or religious parties – had failed in liberating, developing or in uniting Arabs. He argued that only tribes can realize such a dream because they are united by high ideals and traditions: ‘We have gone back to tribes because other forces have failed. Where is the Ba’th Party, where are the Arab nationalists, where are other nationalist parties, where are the communist and religious parties? They are all dispersed and they did nothing. They have failed to unite or liberate the nation. Now the modern party is the tribe, and tomorrow’s army is the tribe.'”

apparently, gaddafi was a master at pitting the tribes against one another. up until now.

so, the state of libya now is as it ever was — full of inbred tribes that are all looking out for themselves (not that there’s anything wrong with that! — but democracy ain’t gonna work well in such a place):

“Tribalism remains a key determinant in political allegiances in Libya. Neither oil wealth and modernizing influences nor Qadhafi’s revolution have altered the web of kinship-based loyalties that has characterized Libya’s domestic political scene for centuries. Libya’s tribes are arranged in a pyramidal lineage scheme of subtribal, clan, and family elements.” [source]

“The rivalries among the tribes of Libya extend to an era well before the formation of the modern Libyan state. Such rivalries are most pronounced in the armed forces. Each of the main tribes is represented in the military establishment and the various popular and revolutionary committees. For instance, Qadhafi’s Qadhadfa tribe has an ongoing rivalry with the Magariha tribe of Abdel Sallam Jalloud, the man who was second-in-command in the country for decades until he fell out of favour….

“The Warfalla tribe, which turned against Qadhafi during the coup attempt in 1993, is numerous and is closest to Jalloud’s Magariha tribe. The Al Zintan tribe backed the Warfalla as well. The coup attempt was spearheaded by Warfalla officers in the Bani Walid region, 120 km south-east of Tripoli. The main reason for the coup attempt was that, despite its size, this tribe was poorly represented in the regime and only occupied second-echelon posts in the officers’ corps.

Moreover, Warfalla tribal officers have been excluded from the air force. The air force is reserved almost exclusively to the Qadhadfa tribe, to which Qadhafi belongs. [and now the air force is bombing the protestors. what a surprise!] It was the air force which crushed the coup attempt in October 1993. Jalloud’s Magariha tribe comes next to the Warfalla in terms of numerical strength and is bigger than the Qadhadfa….

If Jalloud’s Magariha, the Warfalla and Islamic militant groups unite against Qadhafi in an all-out confrontation involving the military, they could take over power. But that would soon be followed by challenges from other tribes. Ultimately, if Qadhafi is overthrown, these tribes could fight each other and Libya could be split into several regions.”

gaddafis. magarihas. warfallas. al zintans. that’s a lot of players to keep track of! right now, the warfallas and another tribe called the al zuwayyas are siding with the protestors. (the al zuwayyas are the ones who threatened to stop the oil exports.)

“Libyans tend to identify themselves as members of tribes or clans rather than citizens of a country, and Colonel Qaddafi has governed in part through the mediation of a ‘social leadership committee’ composed of about 15 representatives of various tribes, said Diederik Vandewalle, a Dartmouth professor who has studied the country.

“What’s more, Mr. Vandewalle noted, most of the tribal representatives on the committee are also military officers, who each represent a tribal group within the military. So, unlike the Tunisian or Egyptian militaries, the Libyan military lacks the cohesion or professionalism that might enable it to step in to resolve the conflict with the protesters or to stabilize the country.“

gaddafi needs (needed?) to go ’cause he’s a psychopathic lunatic that has driven his country into the ground with his bizarro political strategies. but, just as in egypt and bahrain, democracy clearly AIN’T gonna make things much better.

note: no idea what the consanguinity rate for libyans is because of the completely f*cked up health-care system in libya (most of the cousin-marriage research done in the arab world is connected to medical research ’cause of all the genetic diseases|conditions). there is one report which states in the abstract that there is a “high frequency of consanguineous marriages in Libya.” the rate is not in the abstract and, unfortunately, i don’t have access to the journal.

it wouldn’t, i think, be unreasonable to suppose that the consanguinity rate in libya is not unlike its neighbors, egypt and tunisia, which are 38.9% (2000) and 26.9% (1980s) respectively. the moral of the story is: all of those tribes are inbred. and you know what that means.