via ed west (one of those foppish southerners (~_^) ), here is The North-o-Meter test!

how much of a northerner am i? ay up! winter is coming… 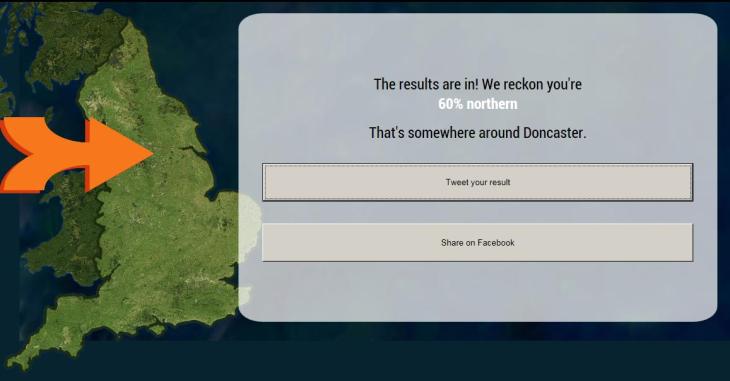 (note: the sunday linkfest shall appear tomorrow [if all goes as planned!]. i feel like we just had a linkfest, since last week’s didn’t happen until wednesday. oops.)

here’s an online right-wing authoritarian (RWA) test for you to try out. i have NO idea how valid it is, or if it even resembles altemeyer’s RWA test. my suspicion is that it’s an older version of the test, but i really don’t know. it’s just an okcupid quiz, so i wouldn’t put a whole lot of weight on it. (~_^)

make sure to follow the instructions re. if you only agree with part of a statement!

i took the quiz last week before i read the chapters in avi tuschman‘s Our Political Nature that include material on the RWA — didn’t want to bias myself. here are my results: 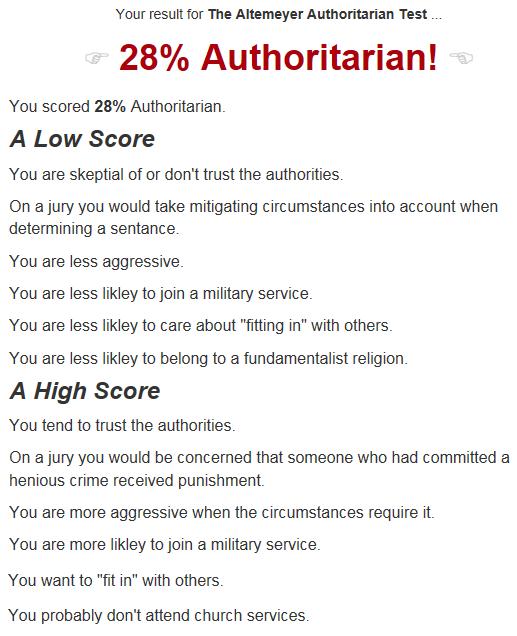 don’t know if my score is particularly high or not. it’s certainly higher than most of the folks over @the democratic underground who took the quiz. not a surprise. (^_^) note that this percentage score does not resemble altemeyer’s scale, so i don’t think there’s any way to compare your scores on this little quiz to any actual academic study. oh well.

more importantly…how much of a northerner are you…?

previously: our political nature and authoritarianism

(note: comments do not require an email. authoritarian states.)

from the audacious e:

“Pew frequently conducts ‘News IQ’ surveys, randomly quizzing 1,000 people on current events. The most recent results are from November 2010. As is always the case, men outperformed women by more than a full point on the 12-item test.”

i got 10 out of 12. (yes. i’m still taking stupid quizzes online….) not bad for a chick! i got the “national inflation rate reported by the gov’t” wrong. i guessed on that one. i never read gov’t stats. i’m not big into fiction. i prefer my reality more real, ya know? i also got wrong “when the congress reconvenes in january, will republicans have a majority in….” don’t ask me why i answered the senate. (wtf??) i’m gonna blame it on taking the test in the wee hours of the morning. (ok. ok. it was sheer stupidity!) the rest of them i was confident that i knew. there was no guessin’.

here’s my results. DON’T LOOK if u wanna take the test. SPOILERS! (click on images for LARGER views.)

update: a commenter over @the audacious’ site says, “It doesn’t bother me that women are more interested in trivial and silly topics like celebrity gossip. What does bother me is that those same women are accorded the same rights and responsibilities as everyone else.”

i have to agree. especially when it comes to voting. there ought to be some sort of civics test required before one is allowed to vote. that would weed out those who don’t take an interest in political issues as well as illiterate and lower iq folks.