oh, yes. saudi arabia. due for a “day of rage” tomorrow. (does that mean we’ll see the return of islamic rage boy?! oh, goodie! remember, tho — those folks don’t like to be made fun of!)

just don’t get fooled by the reports of sectarian violence and sunnis versus shias and all that. what it’ll be is tribal violence. it ain’t got nuthin’ to do with religious sects. it might seem so, but all that’s only on the surface. the sectarian divide(s) are just reflecting tribal (i.e. genetic relatedness) divides.

a lot (most?) of the shia minority in saudi arabia is found on the persian gulf. these people are baharna tribes — just like the shia in bahrain. there are some also other shias found in the south towards yemen.

the ruling saud family, and the wahhabis and salafis, are all related tribes from the central part of arabia. they are not (so) related to the baharnas or the folks down towards yemen. they’re all arabs, sure, but they’re all from different tribes. the sauds, et. al., are ruling over (somewhat) unrelated peoples who might just be getting fed up with the sitch. they are the ones that are gonna be spreading all the rage.

i would guess some of the saudi citizens along the red sea might also join in the action. these are the hashemite tribes who lost out to the al sauds when the “nation” of saudi arabia was founded. i’m guessing they might be generally p*ssed off, too.

and now … your daily hadith:

Narrated Wathilah ibn al-Asqa: I asked, “Messenger of Allah! What is tribalism?” The Prophet, peace be upon him, replied, “That you help your people in wrongdoing.”

update: see also “Saudi Arabia without King Abdullah” for a good breakdown of who’s who in saudi arabian tribal politics.

lemme see if i got this straight:

muhammad, of the banu hashim branch of the quraysh tribe, dies.

his followers — a lot of them who are ALSO members of the quraysh tribe — disagree on who his successor should be.

on the one hand, muhammad’s closest family (wife and kids) and closest followers) want ali, muhammad’s paternal cousin AND son-in-law**, ANOTHER member of the banu hashim, to be the new leader of islam.

muhammad’s enemies, primarly the members of the umayyad family, aka the banu abd-shams, which is a DIFFERENT branch of the quraysh tribe, support abu bakr as the new leader of islam. abu bakr was muhammad’s father-in-law and a member of the banu taym branch of, again, the quaraysh tribe.

so, we’ve got a minimum of three branches of ONE tribe (the quaraysh tribe) — the banu hashim on one side vs. the umayyad family and the banu taym — fighting over the succession.

afaics, then, the whole sunni-shi’a split started as one great arab hatfield-and-mccoy battle to secure supremacy over mecca and other territories as well as over any other clan-branches|clans|tribes that had happened to convert to islam at that time. no?

“…is a geo-political term used to describe a region of the Middle East where the majority population is Shi’a, or where there is a strong Shi’a minority in the population…. The nations where Shi’a Muslims form a dominant majority are Azerbaijan, Iran, Bahrain and Iraq, a plurality in Lebanon and large minorities in Turkey, Afghanistan, Pakistan, Kuwait, Saudi Arabia, India, UAE, and Syria. The shape of these countries put together does in fact resemble a crescent moon or a half moon.” [source] 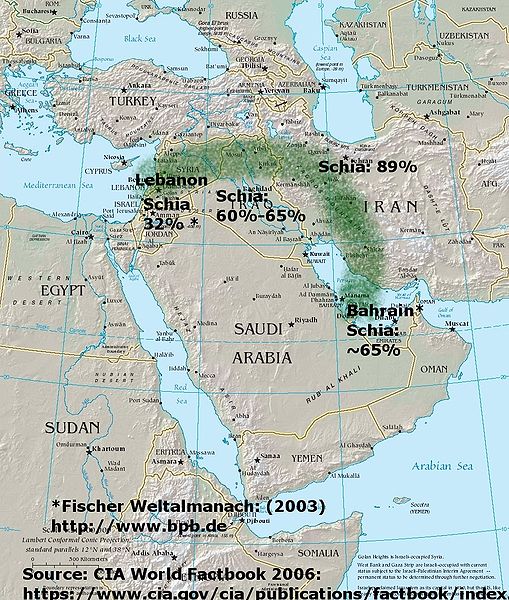 and here’s the distribution of the j1 y-chromosome haplotype w/shia crescent:

and here’s the distribution of the j2 y-chromosome haplotype w/shia crescent:

update 03/03: meng bomin worked a little of his cartographical magic and came up with a couple of neat maps showing how|how much the j2 haplotype corresponds to where the wild shi’as are. here’s what he did:

so, tptb in bahrain are shooting @ the protestors:

Bahrain royal family orders army to turn on the people

“…Most of the protesters are members of Bahrain’s long-marginalised Shia majority.

“They say they are not demanding the abdication of Hamad bin Isa Al Khalifa, Bahrain’s Sunni king, but they are calling for a constitutional monarchy that would treat the Shia fairly and make them equal subjects in his kingdom.

“But they are demanding the resignation of his uncle Khalifa bin Sulman Al Khalifa, who has served as prime minister for 39 years.

“During his rule, the protesters say, the Shia have been turned into second class citizens, deprived of jobs in the army, police force and government while Sunnis from abroad have been given Bahraini citizenship to alter the kingdom’s demographic balance….”

“sunni” and “shia” are really just code words for a couple of populations of unrelated peoples that don’t get along.

in bahrain, the shia — who are probably 66% of the population — are the baharna, the arabs indigenous to the area. they happen to have as allies the ajam, some persians who settled in bahrain within the last 100 years.

i imagine that these two groups are allied together against the ruling “sunnis” just for convenience’s sake. they’d probably have a go at one another given the chance. kinda like how blacks and hispanics here in the u.s. are allied politically … for now ….

the sunni — who are probably 33% of the population — are in charge. they’re other arabs from an area in the center of the arabian peninsula. in other words, they’re really not related at all to the local baharna. they’ve been in bahrain for a couple of hundred years.

it’s kind-of like if the poles went and invaded and took over bulgaria. sure, they’re all slavs (arabs) so they’re related in one way, but clearly the poles (sunni arabs in bahrain) are not really bulgarians (baharna).

the king of bahrain, the prime minister, and roughly half of the cabinet are all members of the al khalifa clan, i.e. they’re all some of these non-bahraini arabs from central arabia.

allied with these sunni arabs that are in charge are the huwala, who were a bunch of sunni arabs from a bunch of different areas who migrated to persia at one time but then came back to the arabian peninsula. (there’s some persians mixed into that group just to add to the confusion.) and, also, the descedants of the african slaves that had belonged to the al khalifas once-upon-a-time are allied to them. oh, there’s also some bedouin tribes in bahrain that are allied to the sunnis in charge.

so, there’s the “bahrainis for dummies” breakdown for you, as far as i understand it.

don’t let THEM throw you off with all this “sunni”/”shia” nonsense. religion and religious sects ain’t got nothing to do with it. not ultimately anyway. there’s a minority of foreigners (+ their allies) ruling over a majority of natives (+ their allies), and the natives are a little fed up, especially since the rulers have been busy electing a new people.

update: from The Menas Associates Blog —

“During the 1990s, there were several years of Shi’a rioting and low level violence mostly in rural areas against a constitution that allowed them virtually no representation. When King Hamad took power in 1999 he offered a new deal whereby the Shi’a appeared to be able to vote freely for a Lower House which would have the main say in parliament. He later altered this to an equal voice to the Upper House. Election arrangements for the Lower House are organised (i.e. gerrymandered) to ensure that the Shi’a are under-represented….

“There are also strong suspicions that the regime has been granting nationality to Sunni from Jordan and other countries in an effort to increase Sunni demographic size…..”

update 02/22: see also IAmA Bahraini Citizen, and I will tell you what’s REALLY going on in Bahrain.

update 03/11: from globalsecurity.org – “The way that government officials are appointed reflects the importance of tribal connections. Members of the ruling family are accommodated first, followed by families and tribes with whom the rulers have been traditionally allied. In Bahrain, for example, the ruling Al Khalifa have given the major positions in the bureaucracy to Sunni Arabs from tribes that helped them rule the island in the nineteenth century. The Al Khalifa have given lesser positions to Shia Arabs from merchant families with whom they engaged in the pearl industry but with whom they had no tribal alliances. But the Al Khalifa have been reluctant to give positions of authority to Shia farmers of Iranian descent to whom they had neither tribal nor economic ties.”