further to my notion that various jewish populations have tended to imitate the mating patterns (eg. cousin marriage or not) of the broader societies in which they have been situated — at least over the last millennium or so (dunno about the ancient hebrews) — here are some numbers on the types of cousin marriage found in the iranian jewish population. remember that consanguineous marriage is quite high among iranian jews — something on the order of 25%. from Outcaste: Jewish Life in Southern Iran [pg. 112]:

notice that nearly one third (3.06%) of all the first cousin marriages (9.88%) are to the father’s brother’s daughter (fbd or FaBrDa in the table). another 1.41% of the marriages are to other patrilateral parallel cousins, probably paternal second cousins. (that’d be father’s father’s brother’s son’s daughter marriage, if you must know. =P or ffbsd marriage! never mind. don’t think about it too hard.)

uuunnnnleeesssss…the jews (also?) introduced it to the region, as they are thought to have done in arabia. hmmmm…?

if (IF) i’m right — going by this persian evidence and the medieval german jewish evidence — that jews have generally adopted the mating patterns of their host populations, then an interesting question is, do other subgroups do this, too? will, for instance, muslim immigrants to the west adopt outbreeding? dunno. mixed signals here. in britain, where most pakistanis are from the kashmir and punjab regions, the total cousin marriage rate in the 1980s (that’s first and second cousins) was 67% [pg. 10]. the rate for all-punjab back in pakistan was 50.3% [pg. 16]. that certainly looks like an increase in cousin marriage in the immigrant population. however, meanwhile in norway, two studies found that pakistani-born pakistanis had higher rates of cousin marriage than norwegian-born pakistanis (37.5% & 34.7% versus 30.1% & 27.1% – pg. 11 – don’t know where pakistanis in norway are from). that looks like a decrease. all things considered, it’s probably too early to tell what the trend(s) might turn out to be.

korotayev and other russian anthropologists have argued — convincingly, imho — that father’s brother’s daughter’s (fbd) marriage was spread by the arabs, since its maximum range today (looking away from the outlier tswana in southern africa) corresponds to the eighth-century caliphate. they further argue that, as part of a more general “arabization” process, the conquered populations emulated their conquerors in all sorts of ways, both in order to succeed in this newly constructed society and, quite possibly, since they viewed the arabs’ culture as somehow superior to their own. the arabs were the conquerors, after all. they must’ve been doing something right! the arabs may even have impressed upon their new subjects that their culture was, indeed, the better one. if they’re right, it seems much less likely to me that immigrant groups to the west will copy our mating patterns if we don’t impress on them that we think they’re important and the right way to go.

i took this table from the recent pew survey of muslims…

…and made a couple of maps (adapted from this map).

the first one is a map of the differences between what percentage of muslims in each country responded that honor killing is never justifiable when a man commits an offense versus a woman committing an offense. a plus number (+) means more enthusiasm for honor killing women — a negative (-), men. here it is (click on image for LARGER view): 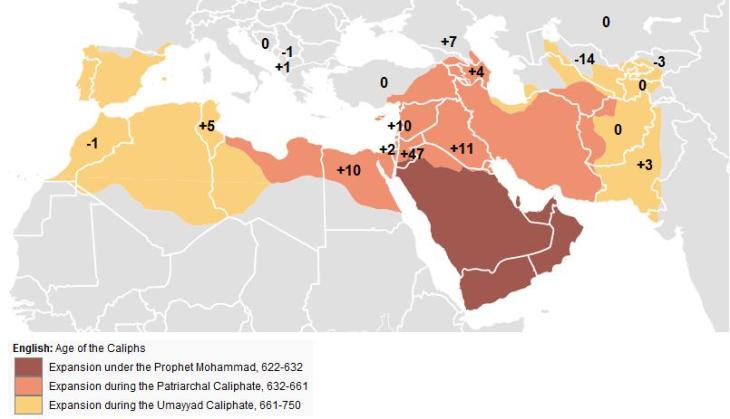 what i think we can see is that, the closer you get to the arab expansion epicenter (the arab peninsula), the greater the enthusiasm for honor killing women. so in jordan it’s +47, lebanon and egypt +10, iraq +11. but when you get out to the edges of the caliphate, the differences are not so great, or they are in fact reversed: morocco -1, turkey and afghanistan and tajikistan 0. even pakistan is only +3. when you get way out to uzbekistan and kyrgyzstan, then the numbers are reversed: -14 and -3.

(it should be noted that for some reason the question was worded differently in uzbekistan, afghanistan, and iraq. everyone else was asked specifically about premarital sex/adultery and family honor, while the uzbekis, afghanis, and iraqis were only asked about family honor. see questions 53 and 54 here [pdf].)

i think that perhaps this is a reflection of what korotayev noticed, i.e. that father’s brother’s daughter (fbd) marriage is found in those places of the world that were a part of the eighth century muslim caliphate, because those populations wanted to emulate the arabs, and the arabs practiced fbd marriage. the reason that the populations on the edges of the caliphate are less enthusiastic about honor killing women is that they were arabized less and/or later than (dare i say it) the “core arabs” and so probably have been practicing fbd marriage for a shorter amount of time. (in fact, korotayev and other russian anthropologists suggest that fbd marriage started in the levant and moved southwards into the arab peninsula, so some of the jordanians and lebanese may have started practicing fbd marriage before the arabs down in the peninsula.)

and/or the arabs simply introduced some crazy “genes for upside-down-and-backwards altruism” to these various populations, and less so on the fringes presumably because not so many arabs actually made it that far. edit: also interesting to note is that in fbd societies, all of the men in extended families/clans share the same y-chromosome. if there is a connection between violence and some gene(s) on the y-chromosome (i thought greg cochran said something about this, but i can’t find it now), maybe this is exacerbated by fbd marriage.

here is the other map — the percentage of muslims in each country responding that it is rarely, sometimes, or often justified to honor kill women:

again, the numbers taper off on the edges of the extent of the caliphate.

(note: comments do not require an email. many, many boobies!)

pew has just released the results of their latest survey of muslims around the world (in 39 different countries).

here’s a map showing the percentage of muslims in each country that would like sharia to be the law of their land (click on map for LARGER image – should take you to the pew site): 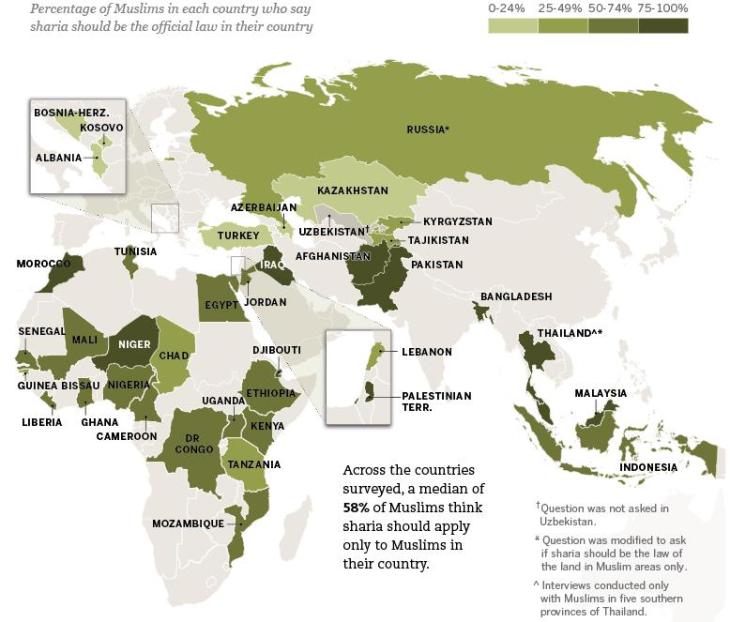 the iraqs, afghanis, and pakistanis all seem pretty eager for sharia — they’re all in the 75-100% range. the moroccans, too. and the palestinian territories.

this is a large report from pew, so have a look at the whole thing yourself.

here’s something else that i found particularly interesting:

i don’t know what, if any, form of cousin marriage is preferred in azerbaijan or bangladesh. paternal cousin marriage, which would include fbd marriage, is avoided in places like chechnya and (at least among some peoples in) dagestan (russia in this survey?) and albania. the difference in the responses in albania was not very great (+1 point), but the difference in russia(?) was statistically significant at +7 points. it’s difficult to know who these “russian” muslims are (maybe the info is in an appendix somewhere — i’ll have to look), so i don’t know if they’re the chechens and/or some dagestanis and/or some other group(s) — and, so, i don’t know what their mating patterns are.

i’m surprised that afghanistan breaks even. i would’ve predicted that they would be like the other fbd marriage groups.

it’s interesting that some of the central asian “stans” — kyrgyzstan and uzbekistan — swing in the opposite direction. a greater number of people feel that honor killings are more justified against men who break the rules than women. i don’t know much of anything about these populations, but i did read a bit just the other day, and it seems that they have a preference for maternal cousin marriage. (note that i don’t have a good idea what the rates might be.)

(note: comments do not require an email. many boobies!)

geneticists will tell you that the percentage of their genomes that two first-cousins will probably share is 6.25% (standard deviation ±2.4% — i’ve been wondering that, too!). but that’s in a randomly mating population. i’ve been wondering what happens in a population where cousin-marriage is the norm and has occurred generation after generation — like in saudi arabia or pakistan. what percentage of their genomes are those kinds of first-cousins likely to share?

well, now i have an answer. (it might not be the answer ’cause these researchers were looking only at families with congenital disorders, so … you know … ascertainment bias and all that.)

in “Quantification of Homozygosity in Consanguineous Individuals with Autosomal Recessive Disease,” woods, et. aaaaallll. (there’s a LOT of them), found that, in populations with regular, long-term cousin-marriage over many generations — in saudi arabians and pakistanis, as a matter of fact — first-cousins shared, on average, 11% of their genomes in common. that’s approaching twice as much as first-cousins in a randomly mating population. 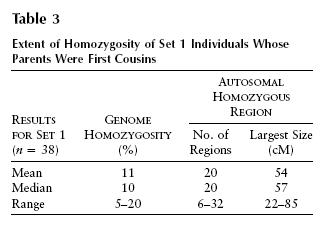 “In conclusion, we found that the amount of homozygosity is greater than expected (11% observed vs. 6% expected) in individuals with autosomal recessive disease whose parents are first cousins and who come from communities that frequently practice consanguineous marriage. First-cousin offspring had as much homozygosity as would have been expected for double–first cousin offspring.”

here, once again, are mr. light-blue and ms. pink and their offspring, mr. dark-blue, to illustrate the differences for you (click on images for a LARGER view — should open in new tab/window): 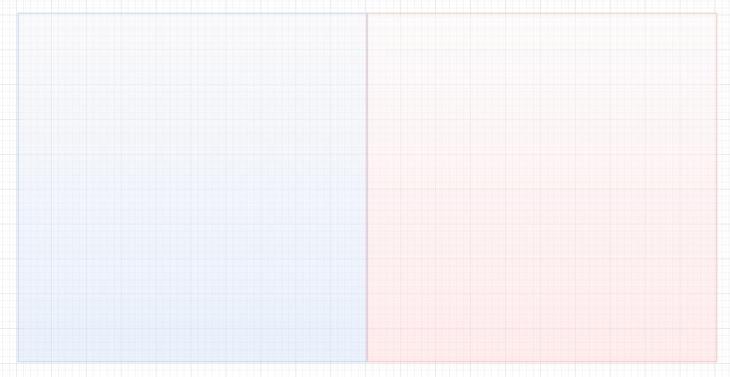 here are the proud parents with their offspring, mr. dark-blue, who inherited the family fortune half of his genome from his father, and the other half from his mother:

here are mr. light-blue and ms. pink again, only this time they are first-cousins and share (prolly) 6.25% of their genomes in common (the bits that overlap):

here they are with blue, jr., who has still inherited half of his genome from each of his parents, but he’s got two identical (by descent) copies of some of his genome — he is less unique than mr. dark-blue above (see how he’s narrower?):

here are mr. light-blue and ms. pink one last time — they are first-cousins once again, but they come from a society where cousin marriage is the norm and are the descendants of a line of cousin marriages. the “overlap” of their genomes (11%) is larger than the first cousins above:

and here’s the final incarnation mr. dark-blue who is even less unique than mr. dark blue ii because he inherited even greater numbers of genes that are identical by descent from his parents:

(note: comments do not require an email. mr. pink.)