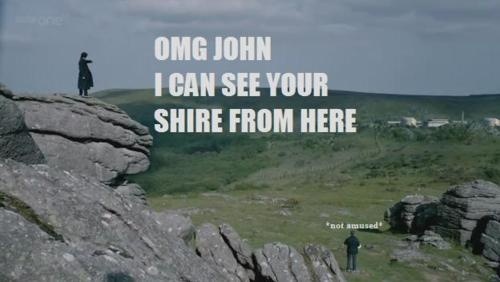 terry nation must’ve had a thing for words ending in “-minate.”

from the opening sequence of blake’s 7 we’ve got:

and then, of course, there’s that most famous of alien races which from nation’s imagination haben gesprungen…

…und, bringing us back to the point of the post, their even more famous catchphrase. (~_^)

(yes, i’m still on a blake’s 7 kick! fyi: between youtube and dailymotion, you can watch pretty much the entire series … but don’t tell them i told you so!)

so apparently not a lot of you are blake’s 7 fans. too bad. you really missed out! especially on some fantastic special effects! — spaceships hurtling through the galaxy suspended on fishing line (just like in the old flash gordon serials!); lethal styrofoam boulders (aren’t they all?); blasters connected to their powerpacks via telephone cords! great stuff! (^_^) (all part of the charm of the show, i assure you.)

AAAAAAND — i didn’t remember this at all — a cousin romance! in “hostage” we learn that our hero, blake, has a thing for his first cousin, inga — his father’s brother’s daughter, no less! what more could you ask for in a sci-fi show?

notice that the youtube user who uploaded this video was a bit squeamish over blake’s romantic feelings. (~_^) and we see that jenna was a bit jealous, too … naturally.

anybody else remember/enjoy watching this show? for my fellow americans, they ran it at least a couple of times on pbs:

(they kinda stole that symbol from star trek, didn’t they? just flipped it on its side!)

(note: comments do not require an email. no peeking!)