pretty much only medieval europe today…

“In some parts of medieval East Central Europe animal herding was the primary means of livelihood. In Albania the inhabitants of the coastal districts evidently lost their connection with agriculture in the 6th and 7th centuries in the wake of the Slavic invasions. Adopting a pastoral life-style, they survived by tending sheep in the mountains, migrating twice annually between winter and summer pastures. These mountaineers regularly raided the plains settlements, supplementing their incomes with plunder. The Magyars had been herders on the Ukrainian steppes prior to invading Central Europe; and even in Hungary, stock raising was their principal means of support. They avoided the thick beeach and pine forests which could not be used as pasture, leaving these to Slavic, German, or Vlach peasants. Travelers of the 12th century described Hungary as one vast grazing area, interrupted only occasionally by patches of cultivated land. The Magyars spent their winters in villages set alongside riverbanks, often in shelters hollowed out of the earth. In spring they sowed their seed, then moved on to the grasslands where they lived in tents. At harvest time they returned to their villages. Their winter habitats were usually near a fortress, while summer residences were located in the vicinity of pastures.

“Similarly the early Serbs lived primarily from stock raising, an occupation well suited to their hilly country. (The region known as Serbia in the 12th century faced the Adriatic and included the rough terrain of Hercegovina and Montenegro.) The chronicler William of Tyre, passing through Serbia in 1168 on his way to the Holy Land, described the local people as warlike mountaineers, rich in milk, cheese, butter, meat, honey, and wax. The Serbs that he observed lived entirely from the products of their herds, although we now know that they also practiced a moderate agriculture in the valleys. Hog raising was a primary activity in medieval Serbia just as in modern times, thanks to an abundant supply of acorns for pigs to feed upon in the thick oak forests. Hunting was also important: bears, wolves, stags, boars, rabbits, martens, and foxes were abundant. Fishing was carried on everywhere in the lakes and streams….

“Stock raising continued to be widely practiced in East Central Europe long after agriculture had become the dominant economic activity. Many animal herders were Vlachs (ancestors of the modern Romanians), who spoke a language derived from Latin. Subsisting on the products of their flocks, they lived in the mountainous regions of southern Poland, Transylvania, and the Balkan Peninsula….

“Whether a free agricultrual population — consisting neither of serfs bound to the land nor of slaves who were owned outright — existed in the early medieval period is a question not easily answered. Conditions varied widely from country to country, and even within a single regions. Nevertheless, it is clear that when the great Slavic migrations came to an end in the 6th-7th centuries and the tribesmen settled down to agriculture, serfdom was unknown. Settled areas were held in common by the clans or tribes….

“Hungary in the 11th and 12th centuries was still largely a pastoral country, where members of the tribes remained free people subject only to their sovereign. The class of true peasants, as opposed to herders engaging in occasional agriculture, was for a long time relatively small. The spread of serfdom was hindered at first by the fact that so much of the land still belonged to communities of herdsmen….. [A]s agriculture gradually replaced herding, the property of the clans was broken up into private estates which were held mainly by nobles and churchmen. Gradually the free Magyar clansmen were transformed into serfs.”

who knew? previously: the flatlanders vs. the mountain people and more on albanians.
_____

how to put a stop to a feud the early medieval way (the following event happened in the 500s a.d.) — from Family, Friends and Followers: Political and Social Bonds in Early Medieval Europe [pg. 33]:

“[K]inship ties were immensely important to the status and rank of this nobility. This may be seen, for instance, from Gregory of Tours’ report of a bitter feud between two Frankish kin-groups. In this case offence had been given when a man from one kin-group was accused of associating with prostitutes and being unfaithful to his wife, who belonged to the other kin-group. This provoked the woman’s brother to attack his brother-in-law, leading to a series of fights in which both men, and most of their supporters, were killed. The fathers of the two dead men then took up the feud. The Merovingian queen, Fredegund, brought an end to the fighting: she invited the leaders of both warring factions to a meal and, when these men and their *pueri* had become drunk, she had them all killed. There can be little doubt that the two kin-groups involved were extremely powerful because the remaining *parentes* were still strong enough to force the queen to flee.”

here, btw, is fredegund … attempting to kill her daughter! (no idea if she was successful or not): 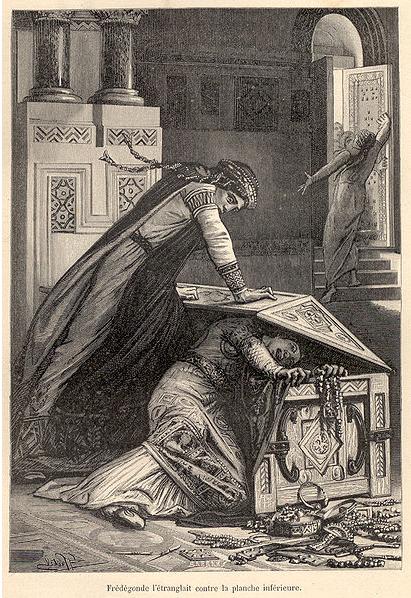 finally, khan krum — krum the horrible — of bulgaria after his defeat of the byzantine emperor nikephoros i being served some wine by a (very nervous looking) servant. the wine has been poured into a skull cup made from nikephoros’ cranium!: