via ben southwood, here’s an interesting looking paper from the journal Personality and Individual Differences: “Genetic polymorphisms predict national differences in life history strategy and time orientation” [pdf]. (the paper’s even from the future! April 2015. (~_^) )

the three genes in question are some of the usual suspects: the androgen receptor gene (AR), DRD4, and the 5-HTTLPR in the SLC6A4 gene. the authors, minkov and bond, worked up a national genetic index based on the variations of these three genes as they relate to life history strategies (LHS) and time orientation (TO). they describe LHS and TO thusly:

“Life history strategy (LHS) theory explains differences in the allocation of an individual’s total bioenergetic and material resources between somatic effort (devoted to the survival of the individual) and reproductive effort (devoted to the production of offspring), as well as parenting effort (devoted to the survival of offspring) and mating effort (devoted to obtaining and retaining sexual partners) (Figueredo et al., 2005). Fast LHS (a focus on reproductive and mating effort) is positively associated with risktaking in animals (Ackerman, Eadie, & Moore, 2006) and humans (Figueredo et al., 2005). In addition to the individual-level studies, a number of nation-level measures associated with LHS have been proposed, relying mostly on national statistics about reproduction, violent crime, and cognitive ability or educational attainment (Meisenberg & Woodley, 2013; Minkov, 2013; Rushton & Templer, 2009; Templer, 2008).

“Some different studies (Hofstede, 2001; Minkov & Hofstede, 2012a) discuss a nation-level short-term versus long-term orientation dimension (STO versus LTO or simply TO for ‘time orientation’), derived from measures of values originally proposed by the Chinese Culture Connection (1987). According to these studies, TO reflects national differences in the endorsement of a wide range of values, some of which are especially prominent and seem to form the backbone of this dimension: future-related values (such as thrift and strong effort in modern education) versus a lack of emphasis on such values. The former set of values is known as long-term orientation, whereas the latter is called short-term orientation (Hofstede, 2001).”

what they found was that:

“Nations that score lower on the LHSGF [Life History Strategy Genetic Factor] are characterized by faster LHS and shorter TO. The reason for this association is that these nations have relatively high percentages of people who carry AR, DRD4, and 5-HTTLPR polymorphisms that seem to stimulate risk-taking, impulsivity, and short-term-oriented mating competition (expressed as a tendency for earlier sexual initiation, sexual networking, and violence, in specific circumstances). The effect of the LHSGF on hypometropia-LHS seems stronger across societies with high socioeconomic inequality.” 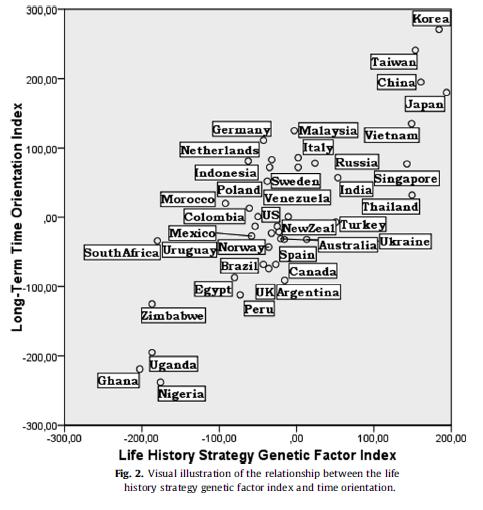 mr. billare objects to the paper on the grounds that, in some cases where data were lacking, the authors estimated the frequencies of the alleles based on the rates found in neighboring populations — neighboring populations that, perhaps, aren’t all that related to those for which there were no available data. that is not ideal, i agree — for example, estimating the national frequency of the DRD4 7-repeat for venezuela based on mexico’s frequency is…questionable. but i don’t think that their reference populations (i.e. the neighboring populations) which they used are that far off in most of the cases — at least not from a first glance at the paper. still, not ideal. definitely a weakness of the study.

my biggest objection to the paper is that’s we’re just talking about three genes here — there must be waaaay more genes related to behavioral traits involved here, as there are with height or intelligence. the authors acknowledge this, though: “[N]ational/ethnic LHS-TO may be driven by a large package of genes, each of which produces a very small effect at the individual level (and, in some cases, no effect at all); however they produce a large cumulative effect at the national level. It is therefore quite possible that our LHSGF index is actually a proxy for a much larger package of genes….“

it’s early days, of course, and teh scientists simply just don’t know even half of the genes involved in our behavioral traits at this point in time. Further Research is RequiredTM! it’ll certainly be exciting when more data arrives! (^_^) this is an intriguing first step, though.

(note: comments do not require an email. boobies!)