here’s a little more on inbreeding in sweden, again from this article: The Influence of Past Endogamy and Consanguinity on Genetic Disorders in Northern Sweden.

the researchers looked at parish record books to work out who married whom — and if and how they were related — in 18th and 19th century skellefteå which is right here: 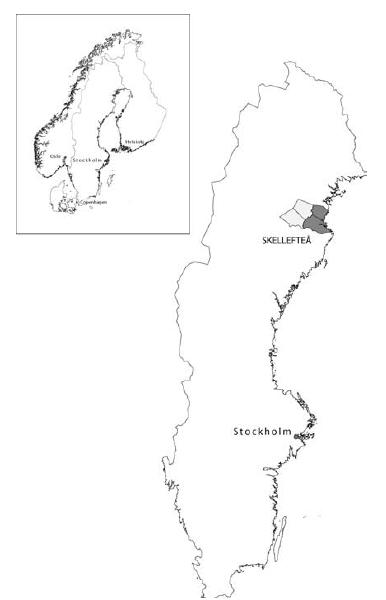 the researchers assure us that, despite being a hair’s breadth away from the arctic cirle, skellefteå was not (is not!) a completely off piste locale and traded regularly with stockholm, etc., etc. so, skellefteå should not be a too a-typical example of mating patterns in sweden at the time. (still, like steve sailer pointed about about sweden in general, skellefteå is not exactly a cross-roads sorta place like istanbul or sicily. so, apart from the swedes and maybe some finns and a few sami and drunken mooses, it prolly wasn’t a very cosmopolitan place in the 18th and 19th centuries.)

“Prior to industrialization an inbreeding pattern characterized by increasing values throughout the 19th century was common to many societies, both European (Calderón et al. 1993; Morales 1992; Pettener 1985) and American (Gradie et al. 1991; Madrigal and Ware 1997). In many European populations, inbreeding was highest in the period from 1875 to 1915 (O’Brien et al. 1988)….” [source]

so, sweden was pretty typical for its times in this regard.

the other country for which i’ve got data from the same time period is spain. (remember that these numbers are probably not representative for the whole of spain. gredos is a mountainous area and remote, mountain populations tend to have higher than average inbreeding rates.) here are the percentages for first- through third-cousin marriages in gredos, spain, in the late-nineteenth and early-twentieth centuries:

only the two first periods here sorta overlap with the last two periods of the swedish data:

so, gredos, spain, had quite a bit more first- through third-cousin marriages in these decades than sweden — but, again, gredos might not be representative for the whole of spain.

overall, then, the swedes did not have very high inbreeding rates in the eighteenth and nineteenth centuries. the cousin marriages rates for sweden during the period were comparable to those in england and probably also northern italy and perhaps even spain. remember, however, that the swedes do not have the same depth of outbreeding as other areas of northern europe. they may have had similar cousin marriage rates to other northern europeans in modern times, but they were likely marrying their cousins for longer during the early medieval period.

(note: comments do not require an email. bork, bork, bork!)