there appears to be a north-south divide in spain on several crucial metrics. for example, pisa scores (good proxy for iq scores/intelligence — see here and here): 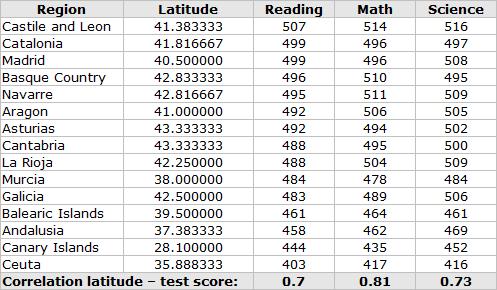 the speculation in hbd circles has long been that these differences have something to do with southern spain’s moorish history vs. northern spain’s visigothic, later catholic, one. but now, from the upcoming american society of human genetics conference, we have this:

so, if this proves to be correct, the major genetic divide in spain is an east-west one, not a north-south one! as razib pointed out:

why, then, the apparent north-south divide in spain (if it’s real)?

not sure. but there is another major difference between northern and southern spain, and that is in the traditional mating patterns/family types — southern spain is (traditionally) outside the hajnal line, while northern spain falls within it:

in other words, northern spain has for a long time been marked by the western european marriage pattern — i.e. late marriage, fewer children — whereas southern spain has not. from what i can tell, this late marriage pattern is found in those areas of europe in which bipartite manorialism was present during the medieval period, but i honestly don’t know if this holds for spain/the iberian peninsula. i shall endeavor to find out! jayman found, btw, that iq scores in europe correspond pretty well to the hajnal line — higher scores within, lower scores outside the line. this also appears to be the case in spain: 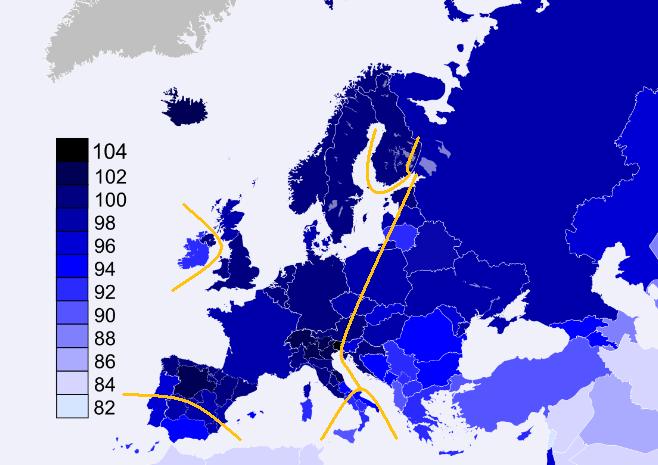 high historic rates of cousin marriage also tend to be present outside the hajnal line. historians generally agree that very close endogamous marriage practices were common in moorish spain — fbd marriage even — and they continued right up into (at least) the sixteenth century.

perhaps regional differences in mating patterns/family types persisted in spain despite the movement of peoples during the reconquista. it could be that northerners who moved south through the country, replacing (or eventually outnumbering) the moors, adopted closer mating habits as they moved southwards. it wouldn’t be the first time, i don’t think, that a transplanted group adopted the marriage practices of the broader host population.

dunno. all still speculative at this point. watch this space! (^_^)

see also: Mapping The 2009 PISA Results For Spain And Italy from the reluctant apostate and IQ Ceilings? from jayman.

(note: comments do not require an email. medieval spain.)