uncle bob beat me to this (hey uncle bob! *waves* (^_^) ). i’ve been meaning to post about human accomplishment in core europe ever since agnostic posted about it last month on his blog.

here, from charles murray’s Human Accomplishment, is a map of “concentrations [of accomplishment] within the european core”:

from murray (via agnostic):

“Or you can think of it another way: 80 percent of all the European significant figures can be enclosed in an area that does not include Russia, Sweden, Norway, Finland, Spain, Portugal, the Balkans, Poland, Hungary, East and West Prussia, Ireland, Wales, most of Scotland, the lower quarter of Italy, and about a third of France.”

the dark blue area of belgium, the netherlands, ile de france, and southeast england is definitely the core area of europe that — thanks to the early enthusiasm of the franks for christianity and the church’s cousin marriage bans AND the franks’ invention of manorialism — has been outbreeding for the longest amount of time out of all the europeans. (see “mating patterns in europe series” below ↓ in left-hand column for more details.) belgium + the netherlands + ile de france = austrasia, which is where manorialism got started. the franks brought the manor system, and the cousin marriage bans, with them on their trek across/conquest of the east — the light blue bits in germany. there is also evidence for the manor system early on in kent and the south of england, not to mention some very early secular laws against cousin marriage in those parts of england. the manor system was introduced in lowland scotland — along with many actual lords of those manors from normandy — by king david. (no, not that one — this one.)

these areas — along with parts of northern italy (the flat parts) — are what i’ve been calling my “core europe” — the most outbred of the europeans (who are, in turn, the most outbred of almost anybody on the planet). although northern italy — tuscany — i’m not 100% sure about. i have found a little evidence suggesting that medieval northern italians maybe avoided marrying their cousins — and perhaps the genetics backs that up — but Further Research is RequiredTM.

map of the “concentrations [of accomplishment] within the european core” with the hajnal line? but of course:

see also: How Inbred are Europeans? from jayman!
_____ 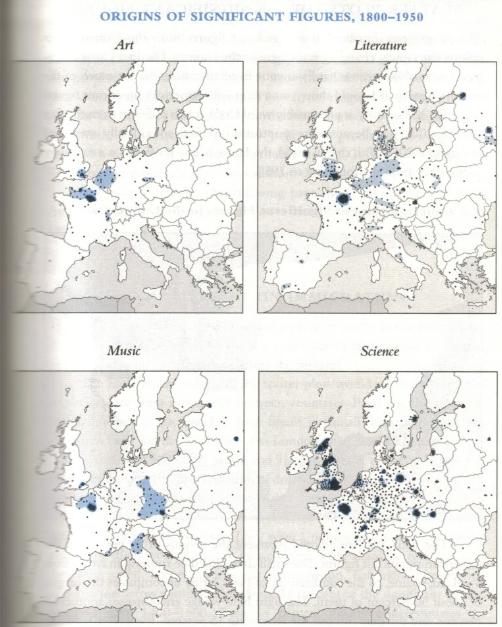