if you’ve been following along, you’ll know that last year i posted about a bit of research by an anthropologist(?) by the name of joseph westermeyer the results of which suggested that peoples in lowland areas below 500m above sea level have a tendency to outbreed (i.e. avoid cousin marriage) while uplanders above 500m above sea level (and, perhaps, peoples in other marginal areas) have a tendency to inbreed (i.e. favor cousin marriage). (see also here.) westermeyer only looked at southeast asia, but i, too, seemed to be finding that pattern repeating in many places: balkans peoples – largely inbreeders, especially the ones way up in the hills; populations in the caucasuses – inbreeders; the auvergnats in france – inbreeders; heeland scots – inbreeders until quite late; afghanis – generally inbreeders, but more so in the mountains than in lowland areas; etc.

on friday, i posted about the wrist-knife wearing, ak-47 some sort-of big gun carrying turkana of east africa (kenya) who also appeared to confirm the pattern: they are a bunch of outbreeders (they avoid anything closer than second cousin marriage) and they live in a lowland region. and they’re pastoralists to boot — teh anthropologists keep saying that pastoralism leads to close marriages (like with the arabs). not!

well. last night i came across this book — Reproduction and Social Organization in Sub-Saharan Africa (1989) — which just blows this flatlanders vs. mountaineers theory right out of the water! (yipee! it’s almost like i’m doing real science! almost. ok, not really. but uncle karl would be so proud!)

in the second chapter, “The Components of Sub-Saharan Reproductive Regimes and Their Social and Cultural Determinants: The Empirical Evidence,” there’s a table on pages 74 and 75 indicating the presence or absence of cousin marriage for 47+ sub-saharan populations (data from murdock’s Ethnographic Atlas), and, as far as i can tell, there’s no rhyme or reason for why some groups inbreed and others don’t. at least the pattern (if there is one!) doesn’t appear to be connected to living in upland or lowland areas.

here is the table from the book (i’ve removed the columns that weren’t related to cousin marriage): 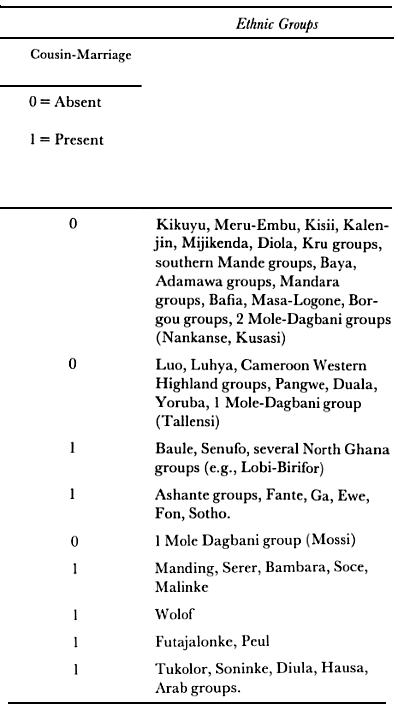 so far i’ve only run through the outbreeders (mostly), but here’s what i’ve got for where these different groups live. i’ve divvied them up by country and indicated approximately where each of the groups lives on the maps (topographic maps from wikipedia — click on maps for LARGER views — not sure who the Kru people from liberia are, so i’ve skipped them for now): 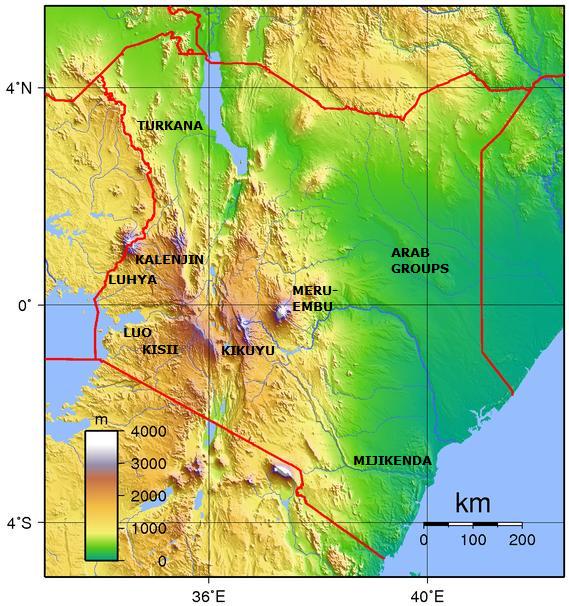 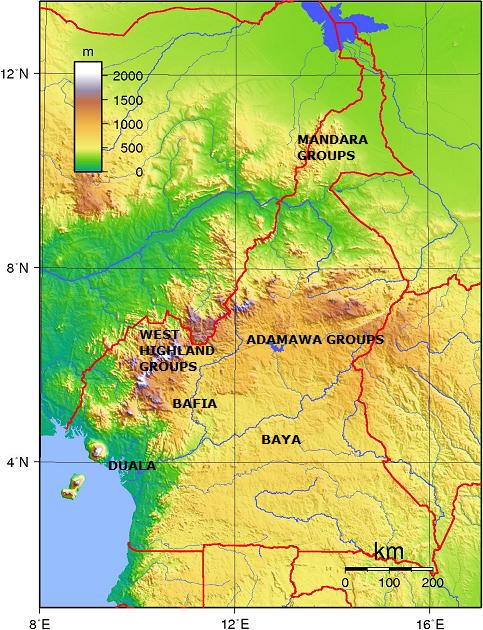 (btw – check out the HUGE velingara circular structure to the right of where i typed “diola.” impact crater? [pdf]) 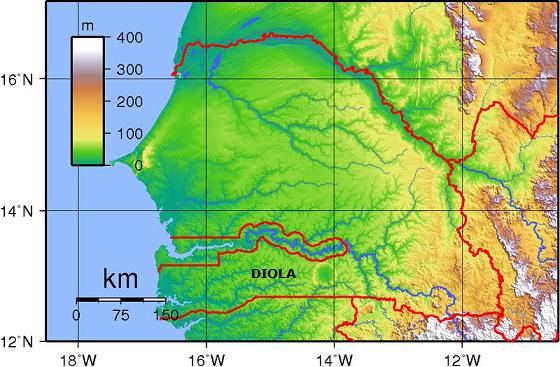 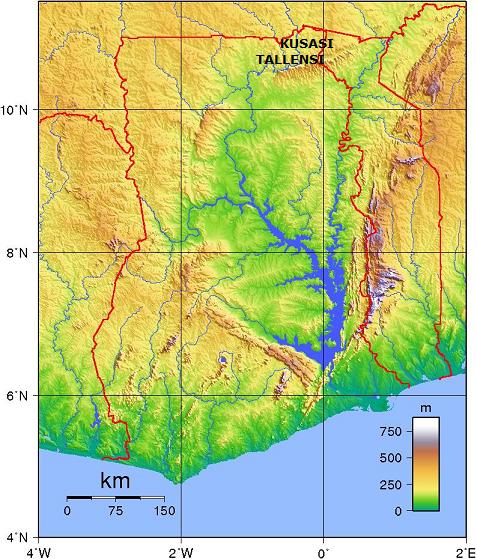 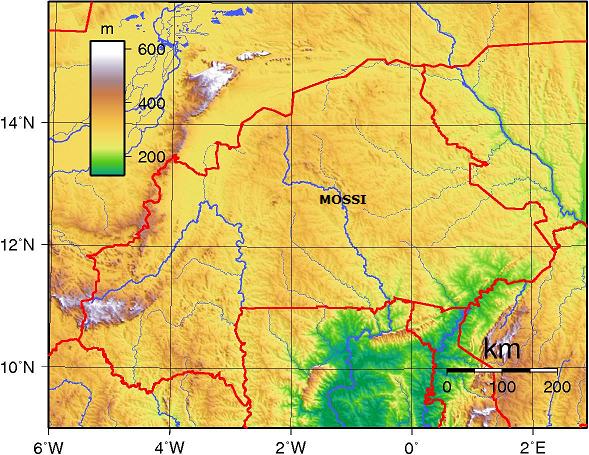 see? that’s eleven upland groups right there which are — if the data are correct — outbreeders not inbreeders. either the flatlanders vs. mountaineers theory is wrong, or the sub-saharan africans are some sort of exception to this rule.

again, most of the groups practice polygamy which does complicate the picture wrt genetic relatedness. i’ll work the inbreeders into the maps one day soon. promise!

previously: this one’s for g.w. and the flatlanders vs. the mountain people

(note: comments do not require an email. velingara circular structure.)

here’s a little data from the demographic and health surveys for three african nations where polygamy is common — benin (2006), burkina faso (2003), and nigeria (2008). these are the percentages of single (never married) men and women at different ages. as you can see, because of polygamy (which creates a shortage of women), it takes longer for men to get married (a first time). 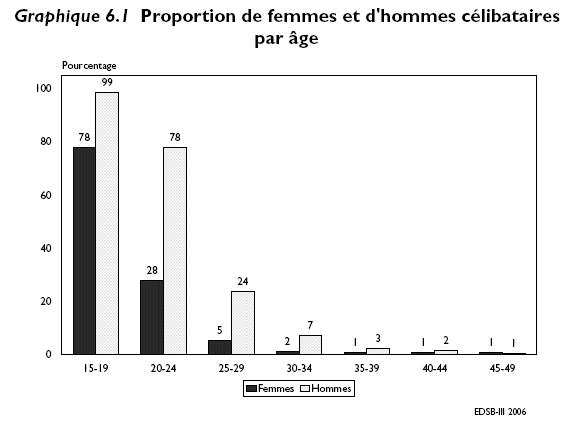 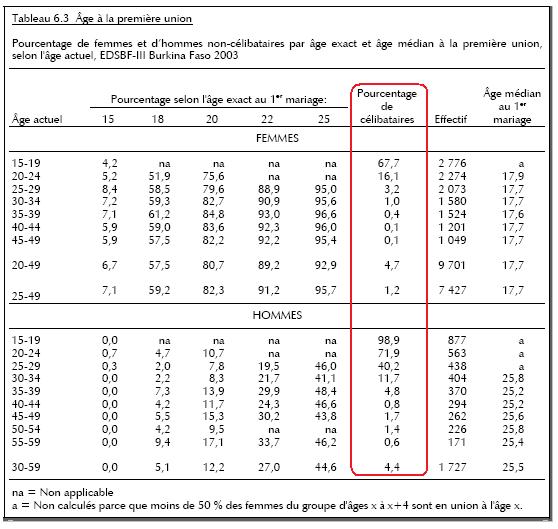 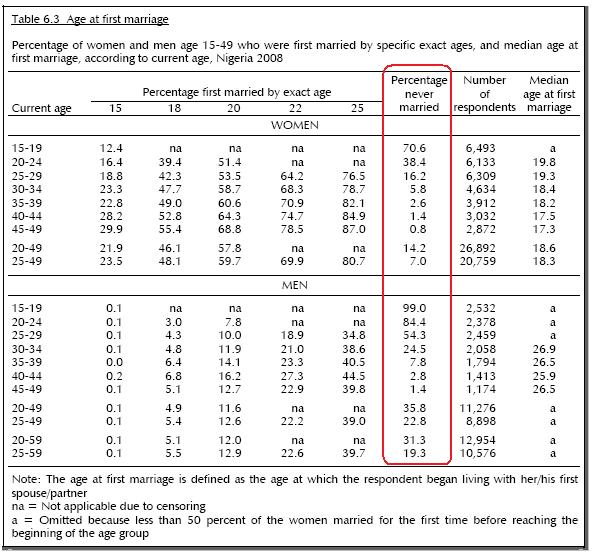 (note: comments do not require an email. or a marriage license.)