pew tells me i’m a “young outsider” which does seem to fit me better than their previous assessment of me as a libertarian (not!) — except maybe for the (*ahem*) young part. (*^_^*)

Your best fit is Young Outsider along with 13% of the public.

This relatively young, largely independent group holds a mix of conservative and liberal views. And while more lean toward the Republican Party than the Democratic Party, Young Outsiders generally express unfavorable opinions of both major parties….

They are largely skeptical of activist government, as a substantial majority views government as wasteful and inefficient. Yet many diverge from the two conservative typology groups – Steadfast Conservatives and Business Conservatives – in their strong support for the environment and many liberal social policies. 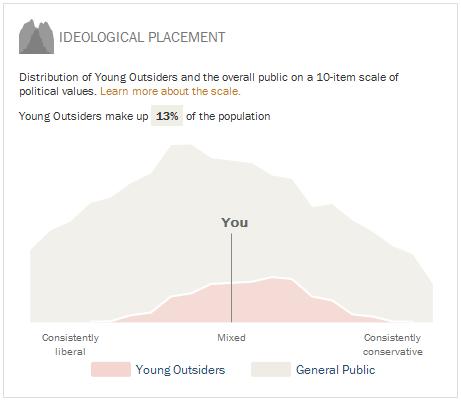 (note: comments do not require an email. pew! pew!)