or an easterner (east asian)?

in which group does the flower at the bottom belong: group a or group b? 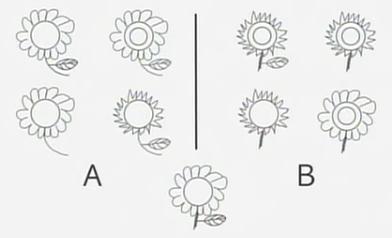 feel free to leave your answer in the comments and — only if you like — the reason(s) for your choice and/or your ethnic background. (^_^) (you don’t have to be specific — you can say “eastern” or “southern” european, etc., if you prefer.)
_____

this little test was lifted from the documentary below (thanks, gottlieb!). i haven’t watched the entire thing yet, but it looks to be good!

see also t. greer’s excellent post: “West and East and How We Think.” (btw, t. greer has a really neat blog in general!)

(note: comments do not require an email. wild westerner?)