i came across these stats from the bureau of justice statistics while looking for something else. i thought i’d post them, even though they make me sad. =(

well that table pretty much speaks for itself.

…but the key thing to remember here is that the bureau includes STEPPARENTS in these figures. then you’re (naturally) gonna get the cinderella effect — mostly men getting rid of the offspring of other men.

and it is mostly men. from page 34 of the report (remember “fathers” includes stepfathers):

“Of those children killed by someone other than their parent, 81% were killed by males.”

and they’re mostly young, reproductive-age men (and women) — again, naturally. on page 23 we learn that 81.3% of the perpetrators of infanticide were between the ages of 18 and 34.

also interesting, the younger the child, the greater the risk for infanticide: 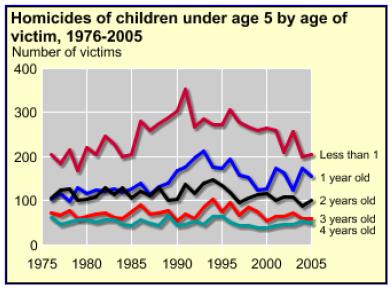 i wonder if this has to do with very young children — babies — not really having a “personality” yet? yes, i know that they do when you really know them, but you know what i mean — a five year old kid has a more … observable, noticeable … personality than a five month old. maybe it’s kinda “easier” to kill something without much personality than a little person that talks back to you? dunno.

if i were to give women any advice, i’d say be very, very careful in picking your second husband or next boyfriend/baby daddy if you’ve got a young kid(s). and i’d be extra very, very careful if picking an african american man as a second husband/boyfriend/baby daddy. if i were to give men any advice, i’d say keep a watch on your ex’s choice of any subsequent partners if you’ve had a kid(s) with her.

(note: comments do not require an email. something cheerful!)