i thought i’d dip into the world values survey again to see what mexicans think/feel about certain behavioral norms/illegal activities in society as compared to americans (both white and black).

i looked at the world values survey 2005 and 2006 for the u.s. and mexico (you can read all about the two surveys in the technical reports here — they appear to be sound surveys to me). what i looked at were four of the “justifiable” questions:

Please tell me for each of the following statements whether you think it can always be justified, never be justified, or something in between [on a scale from 1 to 10, never to always]:

– Claiming government benefits to which you are not entitled.
– Avoiding a fare on public transport.
– Cheating on taxes if you have a chance.
– Someone accepting a bribe in the course of their duties.

here are the results of those who answered “Never justifiable” by sub-population for each of the questions. moreno oscuro=dark mestizo, moreno claro=light mestizo. i left out the indigenous group in mexico because the sample size was too small. the sample sizes are n=ca. 130-830.

– Claiming government benefits to which you are not entitled. – Never justifiable. 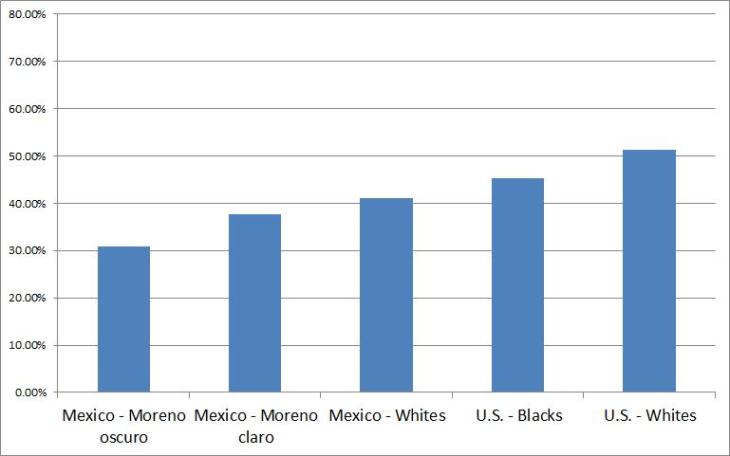 again, a ten to twenty point difference between the various mexican sub-groups and white americans.

– Cheating on taxes if you have a chance. – Never justfiable.

– Someone accepting a bribe in the course of their duties. – Never justifiable.

again, at least a ten, if not twenty, point spread between when it comes to thinking bribe taking can be justifiable.

it seems, then, that most mexicans — from white mexicans to dark-skinned mestizos (don’t know about the purely indigenous groups) — more ofen than white americans, feel that various types of cheating in society can be justified to some degree or another.

previously: civicness in mexico and familism in the u.s. of a. and anglo-american vs. mexican family values and hispanic family values

(note: comments do not require an email. likelihood of bribing mexican traffic police.)