this is just a preliminary look at the mating patterns of the medieval and early modern scots. ok, here we go…

first of all, there are three regions of scotland that need to be taken into account (i’m ignoring the northern isles for now): the gàidhealtachd or scottish gaelic-speaking area of the country — i.e. the “highlands and the islands“; the lowlands; and the scottish borders (where america’s scots irish mostly came from). here’s a map of the highlands and lowlands — the borders are tucked down here. keep in mind that in the medieval period, the gaelic-speaking regions extended further south to somewhere around where i’ve drawn a nifty red line (total approximation):

let’s start with the clans up north ’cause they’re a lot of fun! here from Finding the Family in Medieval and Early Modern Scotland [pgs. 131, 134 – link added by me]:

“[A]s early as 1336 John MacDonald of Islay applied for papal dispensation to marry his cousin Amy Macruari. According to canon law this marriage was within the forbidden degrees of consanguinity and any children born of the union would not have been regarded as legitimate. The existence of close ties of consanguinity or affinity between married persons was common in the Highlands but MacDonald was aware of the wider context and the need for his son to be regarded as legitimate by the Scottish crown.

“Clan marriages were directed towards various ends, whether political, military or economic. Prioritisation of these considerations depended on the size, standing and policy of a particular clan. A study of the marriage patterns of the chiefly family of the Mackintoshes reveals both an internal and external agenda. During the fourteenth and early fifteenth centuries it was common for the children of successive chiefs to be married into local families while at least one child was married into a satellite clan of the Clan Chattan, thereby reinforcing clan solidarity. By the sixteenth century, however, a clear shift in policy is evident. Internal marriage still took place regularly although in instances where a chief had fewer children it was unusual for endogamous marriage to take place. Instead it was more important to use marriage as a means of establishing and reinforcing external alliances. However, if during a period of political instability a particular chief felt the need to reinforce clan cohesion a greater number of marriages were contracted internally.”

so, cousin marriage was common in the scottish highlands in the medieval period, but there was a shift from endogamous to more exogamous marriages sometime around the 1500s. the late medieval period, or possibly a bit earlier, was also the time when the importance of clans in scotland began to wane [pgs. 127-128].

how much cousin/endogamous marriage was there amongst the medieval highland clans? difficult to know. the partial geneaology of one clan, the macpherson clan [opens pdf], which has been well-researched, offers some clues. there are three branches of the macpherson clan — the sliochd choinnich, the sliochd iain and the sliochd ghill-iosa — and the genealogy runs from the middle of the fourteenth through the seventeenth centuries [pgs. 10-11]:

“The genealogy contains almost a thousand Macphersons, men and women, besides some two hundred non-Macpherson marriage partners…. Of the total number of Macphersons about 750 are males, just over 200 are females; and over 300 marriages are recorded. These figures reflect two peculiar features of the document: daughters were ignored or forgotten unless they made a politically useful marriage; and younger sons and their male descendants do not have their marriages recorded if they were not established on separate farms of their own. This shows the relationship between patrilineal descent, marriage, and property as seen by the genealogist. Thus the genealogy contains sections liberally sprinkled with daughters and wives, while other sections consist solely of men. This partiality in the amount of information offered by the genealogy must be borne in mind in examining the marriages within the clan. The figures are given in the following table: 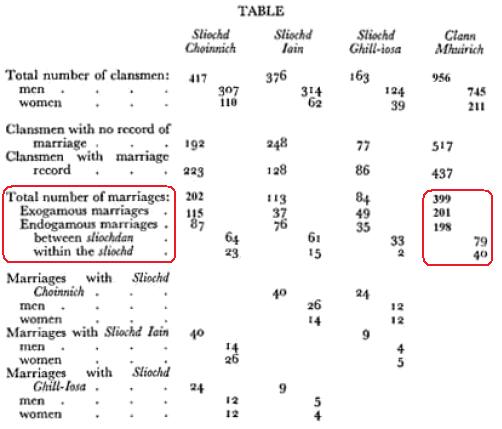 the total marriages for the entire clan are the the last column, highlighted in red. more from the article [pgs. 11-12]:

“Rather more than one-third of the recorded marriages were endogamous, that is, they took place within the clan, both parties being Macphersons. More surprising perhaps, the geneaology reveals that marriage within the sliochd [i.e. one patriline] was permissible. Of the 119 endogamous marriages recorded in the clan, no fewer than 40 took place within one or other of the three major sliochdan. Geographical propinquity was doubtless a factor in the occurrence of some of these marriages, but a more potent force was probably the desire to prevent rights in moveable property, especially stock, and right in land from passing out of the sliochd. The same argument is probably true for inter-sliochd marriages in the clan. One curious consequence of this, perhaps, was the existence of a custom of concubinage where the rules of the Church forbade marriage. The genealogy provides one possible example of this in the case of John Macpherson of Knappach who took the widow of his deceased uncle Thomas as ‘his concubine’. The woman involved was Connie Macpherson, daughter of Donald Dow Macpherson of Pitchirn and Connie Macpherson of Essich. She was, perhaps, following the example of her father, who, after the death of her mother, ‘took as his concubine’ Eneir Cameron of Glennevis from whom the Macphersons of Clune descended. At any rate it is quite clear that the Highland clans and their major patrilineal divisions entertained no rules enforcing exogamy….

“One curious result of repeated marriage within the clan was that cousin-ship was not a simple matter of two lines of patrilineal descent from a common forebear, but was exceedingly intricate. So complex, indeed, were the relationships established within the clan that many clansmen of the tenth and subsequent generations were able to trace their descent back to, not one, but all three of the original brothers, and often to one of them more than once….

“The exogamous marriages were formed with influential families, almost exclusively of the Highlands….”

so, one-third of the macpherson clan marriages were within the clan (compare this to 25% in cumbria, one of the border counties in northern england, in the early modern period), many times within one of the patrilines. the macphersons, like john macdonald we heard about above, got around the church’s bans on marriage to certain individuals (cousins, for one) simply by shacking up instead of marrying (john macdonald paid the dispensation fee ’cause he wanted his heir to be legitimate). one of the results of all this inbreeding was that macpherson cousins were more related to one another than cousins in a more outbreeding society would be.
_____

that’s all i’ve got so far for the highland scots. now for the lowland scots — slightly later in time in the early modern period. here are some excerpts from Scottish Society, 1500-1800 related to the mobility and marriage ages of the lowland scots. both sound pretty standard for societies found behind the hajnal line [pgs. 52-53]:

“Lowland Scotland was similar to England in that a high proportion of young, single men and women in rural areas left home in their teens to work as farm and domestic servants in other households. Until more detailed local studies are undertaken it is unclear whether Scottish servants left home at similar ages to their English counterparts or were younger. The origins of this system in England go back to late medieval times at least. In Scotland farm servants were too numerous in the sixteenth century for this group not to have existed at an earlier date…. Farm servants were common in Orkney, Shetland and the Hebrides in the seventeenth century and presumably must have existed in other parts of the Highlands but it is not clear whether systems of hiring and mobility in these areas were comparable with the Lowlands. They were more frequent in lowland arable areas than in the pastoral uplands of southern Scotland. In Lowland Scotland, farm servants normally hired themselves out for a year, as in England and, as Houston has shown, they commonly moved from one master to another, though usually over limited distances….”

“During the eighteenth century just over 20 per cent of women in a sample of Lowland parishes had never been married by the time they reached the end of their childbearing span. Those who married did so on average in their mid-20s, like most women in north-western Europe before the nineteenth century. There is some impressionistic evidence that in the Highlands and the Islands a marriage pattern closer to eastern or Mediterranean Europe prevailed with women marrying for the first time in their late teens. These estimates, based on literary sources, are not entirely reliable, though they are lent credence by the high birth rate in the region during the eighteenth century.”
_____

finally, one note from “In all gudly haste”: The Formation of Marriage in Scotland, c. 1350-­‐1600 — when the reformation came to scotland, the marriage laws were changed so that cousin marriage was permitted (similar changes were made in other protestant nations like germany). i don’t know if this led to an actual increase of cousin marriage in scotland or not. it may have, but then again it may not have. nowadays, it is rather ironic that protestant nations in europe, which generally do not forbid cousin marriage, have very low rates of consanguineous marriage, while roman catholic countries, where cousin marriage is banned at least by the church, generally have comparatively high rates (sometimes very high). here from “In all gudly haste” [pg. 112]:

“[R]eformers altered the rules about incest and consanguinity to better reflect the values of their countrymen. The Marriage Act and the Incest Act were passed in 1567. The acts provided increased leniency to distant consanguinity by legalising first-cousin marriage in Scotland. However, they made close incest punishable by death for ‘the abhominabill, vile and fylthie lust of incest’ in relationships within the first degree. Although these were major changes in law, they did not represent significant changes in the attitudes and actions of the lairdly and noble classes, who had demonstrated similar feelings for a long time.” 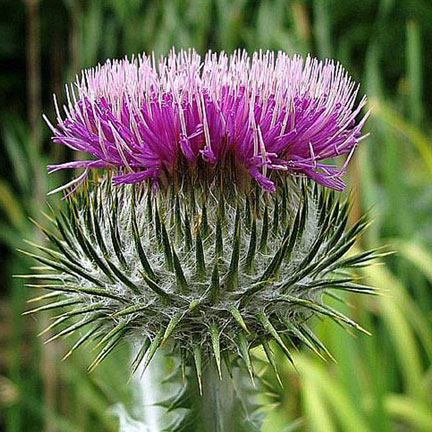 previously: more on consanguinity in england (and scotland) and “culture” of honor and hatfields and mccoys

(note: comments do not require an email. moo.)