i keep saying that consanguineous/endogamous mating patterns lead to clannishness/tribalism, but do they really? i think the evidence strongly suggests yes (see the mating patterns series in the left-hand column below ↓), but it would be nice to quantify it. but how?

consang.net‘s data on modern cousin marriage rates would be easy and convenient to use, but where are the data on whether those societies are individualistic, clannish or tribal or whatever? i’m not aware of anything like that (if anyone is, please let me know!). i could, perhaps, sit down and, based on what i know, rate all these nations as clannish, etc., but 1) i might be wrong in some or a lot of the cases, and 2) i’d be worried about introducing my own biases. so that’s no good.

so, i thought i’d try george murdock‘s ethnographic atlas to see if i could find any useful info there. i did! (i think.)

what i looked for: which types and what frequencies of different basic family types (domestic organization) are found in societies with various mating patterns (number of cousin marriage [preferential] and community marriage organization). i got results for 186 different societies.

i collapsed these categories into: nuclear/stem families, polygynous/polyandrous families and extended families. i figured stem families are practically nuclear families, just with grandma and/or grandpa included. i left the polygynous/polyandrous societies (there were 30 of them) out of the final analysis ’cause i just don’t know what they are. nuclear families? extended families? i dunno.

the first four categories are all versions cousin marriage, so i collapsed those together.

for each of the societies that came back as “no preferential or prescriptive unions” (a total of 123), i drilled down into the “community marriage organization” category to see if i could work out if their marriage patterns were generally endogamous or exogamous.

i collapsed these categories into either endogamous or exogamous, and then i combined the endogamous societies with the cousin marrying societies from above. i left the agamous communities (there were 66 of them) out of the final analysis ’cause who knows if they’re marrying in or out.

here’s what i found (click on chart for LARGER view): 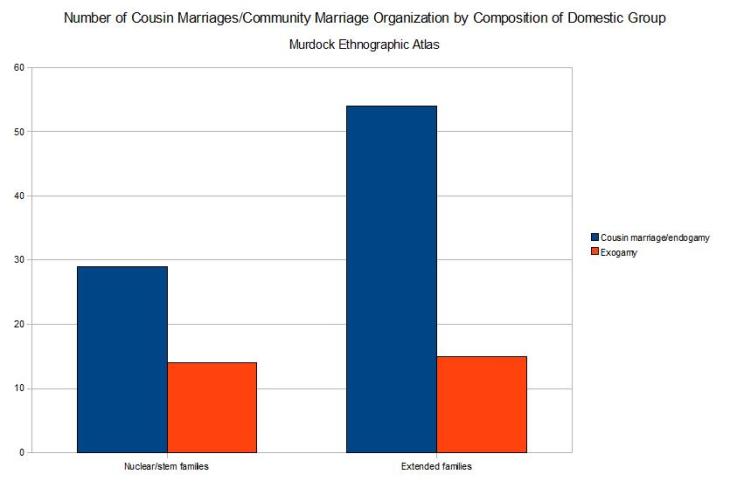 this isn’t a perfect analysis. a lot of the data in the murdock atlas is quite old, but it is still used frequently. and likely i screwed up along the way somewhere. but i think this is another indicator that, at the very least, there is a connection between in-marrying and clannishness.