in response to my post on why fbd marriage amounts to more inbreeding than mbd marriage (short answer: it results in more double-first cousin marriages), violet asks:

“I don’t understand why there can’t be double first cousins with mbd.”

but who does ego’s brother (the triangle to the right of ego) marry? if he lives in a society in which mbd marriage is favored (china, for instance), and if there’s a female maternal cousin available, he’ll marry her (maybe/probably). in this case, that’s ego’s wife’s sister: 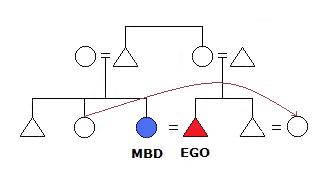 then what? well, in the next generation, unlike in fbd marriage, the kids of ego and his brother should NOT marry each other. the kids should marry their mothers’ brothers’ kids:

also, you can see that there’s an additional party brought into this family tree — the yellow mom/aunt. she is not from ego’s patrilineage. she’s an outsider to some degree or another, and these wives that are brought in from the outside are why mbd marriage is often described as alliance building — different patrilineages build ties with one another.

the reason any of this is good to know is because it is important to bear in mind that not all cousin marriage systems are the same — some result in more inbreeding or closer genetic relatedness between family members than others — and that should affect the evolution of “genes for altruism/other innate social aptitudes” in these populations.

previously: why fbd marriage amounts to more inbreeding than mbd marriage and tribes and types of cousin-marriage

(note: comments do not require an email. contrarian!)