in family type in egypt, i hinted that inbreeding in egypt is greater in southern or upper egypt than in northern or lower egypt. now i’m going to show you the proof. PROOF i tell you! (^_^)

every few years, egypt conducts a demographic and health survey (so do a lot of other countries — thanks to us, i think). the egyptians, very thoughtfully, collect data on consanguineous mating patterns, i.e. first- and second-cousin marriages. here are the most recent egypt dhs surveys from 2000, 2005 and 2008 [all pdfs]. and here is a chart of the consanguineous (first- and second-cousin) marriage rates for four regions of egypt: urban governorates, lower egypt (delta) governorates, upper egypt (nile valley) governorates, and frontier (border regions) governorates (see list at bottom of post for which ones are which): 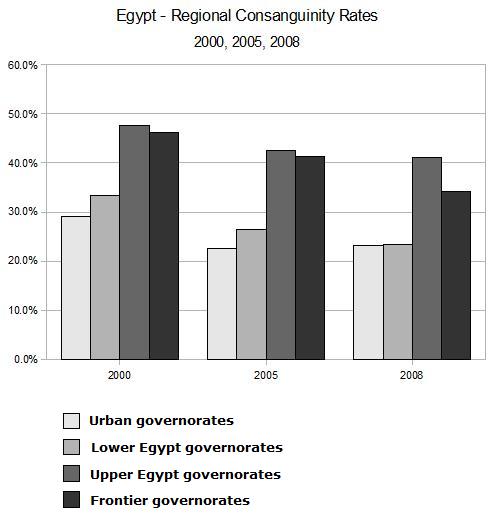 and here’s a map of those four regions: 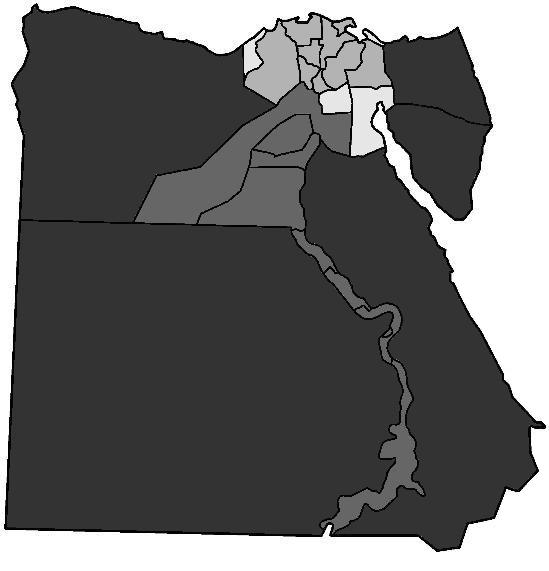 the first thing you’ll notice is that egyptians marry their cousins a LOT. much more than americans or most europeans (esp. nw europeans). even in 2008, in cairo or alexandria nearly one in every four (23.2%) of all marriages were between people who were first- or second-cousins. and it was practically double that (41.2%) upriver in upper egypt. so, there’s a lot of cousin marriage in egypt — and much more in the south than in the north (told ya!)

so, you know, just one generation ago, first-cousin marriage rates were twice as frequent in egypt as they are today. the decline is good news maybe, but keep in mind what the very recent high rates might mean for the frequencies and distribution of “genes for altruism” in the egyptian population. things don’t just change overnight.

father’s brother’s daughter (fbd) marriage is pretty popular in egypt. in 2008, nearly ten percent of all marriages were between the children of two brothers. there’s more fbd marriage in rural areas than in urban areas:

in Family in Contemporary Egypt [available on questia], andrea rugh says that the shift away from marrying cousins by urbanites began “about a generation ago.” rugh’s work was published in 1984, so she’s talking about sometime in the ’60s or maybe late-’50s. that means that nowadays there’s a good two or three generations of urban egyptians — not the recently arrived ones from the countryside, but people whose families have lived in the cities for several or maybe scores(!) of generations — that are now relatively outbred, certainly compared to most other people in the country. from rugh [pg. 140]:

“Among the middle classes and élites there is evidence that relative marriage persisted as a common form until the present generation of young people [i.e. in 1984 – hbd chick]. Until the 1952 revolution and the extension of education to the masses of Egypt’s population, there was little to interfere with the family as a key socializing institution. Those who received private educations did so in carefully sex-segregated institutions, along with their sisters or brothers, cousins, and well-screened others of the same social classes. Leisuretime socializing took place in the family courtyards or apartments of relatives. Parents exerted much stronger controls over whom their children met than they do now. Middle-aged and older people of those classes almost universally comment on how restricted their access to the opposite sex was, beyond those individuals of the extended family group with whom almost their whole time was spent.

“Family genealogies of these classes are filled with kin and sibling marriages up until about a generation ago when, in an impressive reversal, stranger marriages replaced them in the vast majority of cases. This phenomenon to a large extent reflects the changing degree of parental control among these social classes. Young people now have greater freedom of movement, rationalized as noted by the increasing importance of extended education. Controls now are vested less in overt mechanisms such as confinement and protection (seen in chaperonage and veiling) and more in internalized ‘nice-girl’ constructs (see Chapter 9) which individuals implement to a large extent by themselves.”

how long have egyptians been marrying their cousins or otherwise inbreeding or marrying endogamously?

well, certainly fbd marriage was most probably introduced when islam arrived in the country, i.e. from sometime after the seventh century a.d. so that’s, at the max, a possible 1600 years of fbd marriage — an interesting, quirky twist in history since that’s just about the length of time nw europeans have been outbreeding.

were egyptians inbreeding before that? hard to say. it seems like a good guess ’cause most peoples in the world have tended to inbreed one way or another. from the third century a.d. until the arrival of islam, most egyptians had been christians. but afaik, none of the christian churches started with this whole cousin marriage ban thing until the roman catholic church did in the 400s.

the ethiopian coptic ban on cousin marriage out to sixth cousins originated from something written by an egyptian copt in 1240 a.d. is that when egyptian copts began to avoid cousin marriage? if so, then they seem to have missed out on the roman catholic church’s revisions of its regulations in 1215 a.d. which pushed the ban from sixth cousins back to just third cousins.

speaking of copts, i read something, somewhere that said that egyptian copts, today, prefer second-cousin marriage to first-cousin marriage, but i’ll be d*mned if i can remember where i read that. can’t find that reference, so don’t believe me! (i don’t.)

and i know what you’re gonna say: way back when egyptians married their siblings (ewwww!) just like the pharohs. actually, they probably didn’t. but that’s material for another post. this one’s way too long already anyway. (^_^)

previously: family type in egypt and corporations and collectivities and aígyptos
_____

update 05/13: sounds to me as though, by the eleventh century a.d., copts in egypt had adopted the practice of marrying their cousins from their muslim overlords. at the very least, the coptic church at this time does not seem to have had a ban on cousin marriage.

here from “Regulating sex – A brief survey of medieval Copto-Arabic canons” in Across the Religious Divide – Women, Property, and Law in the Wider Mediterranean (ca. 1300-1800) [pgs. 29-30]:

“For Cyril [II] and Ibn Turayk, clergy are strictly forbidden from cohabiting with a woman, unless she falls under the category of one who is forbidden to him (muharrama). In his sixth canon, Cyril writes:

“‘It is not permitted to a bishop, or a priest, or deacon, or layman to live with a woman at all, unless it be a mother, or a sister, or a paternal aunt, or a maternal aunt who are forbidden to him. Whoever gainsay this, judgment for disobedience is necessary for him….’

“In the case of Cyril’s canon, it seems that no man (cleric or lay) should cohabit with a woman other than those ‘who are forbidden to him’ (tuharram ‘alayhi)….

“While there are parallels between both Cyril’s and Ibn Turayk’s canons and the Latern Council canon (which is actually a reference to a Nicene Council canon), there is also an important parallel between the Copto-Arabic canons and Islamic jurisprudential vocabulary. The Arabic words that Cyril and Ibn Turayk use to describe the category of forbidden women (Cyril uses form V’s tuharram a’layhi, and Ibn Turayk uses the plural passive participle muharramat) are borrowed from Islamic jurisprudence; the definition of this category may be understood from the Qur’anic verse found in Surat al-Nisa:

pope cyril ii was around from 1078-1092. his canon on which women were forbidden to men does not include any cousins, and it quite parallels what is written in the koran.
_____

(note: comments do not require an email. a post on egypt – just another excuse to link to this!)