according to a new survey from pew:

“Egyptians also want Islam to play a major role in society, and most believe the Quran should shape the country’s laws, although a growing minority expresses reservations about the increasing influence of Islam in politics…. 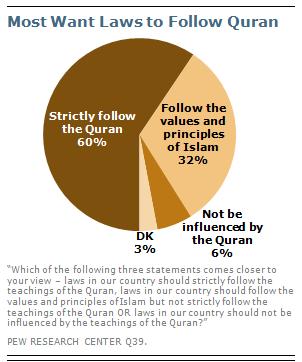 “When asked which country is the better model for the role of religion in government, Turkey or Saudi Arabia, 61% say the latter….”

“However, most also endorse specific democratic rights and institutions that do not exist in Saudi Arabia, such as free speech, a free press, and equal rights for women….

“There is no consensus among Egyptians as to whether American financial assistance to their country is primarily economic or military. A plurality (34%) believes the aid is mostly to help Egypt develop economically, while 23% say the aid is mostly military. Nearly three-in-ten (28%) believe it is divided equally between economic and military assistance, and 14% offer no opinion.

“Both types of American aid are viewed negatively by Egyptians. About six-in-ten (61%) say U.S. military aid has a harmful influence on Egypt, while just 11% believe its impact is positive, and 25% say it has no impact. Similarly, 61% consider U.S. economic aid harmful, while the remainder of the public is split between positive views (21%) and the belief that the aid has no impact (17%)….“

i should ‘fess up right now that i have an inexplicable** soft spot for egypt and egyptians. i really do wish them well and hope it all works out for them as best as it can work out.

previously: what egyptians want and aígyptos

(note: comments do not require an email. **it’s got something to do with all this stuff.)